GB ‘forbidden’ to Canadians but not to the US 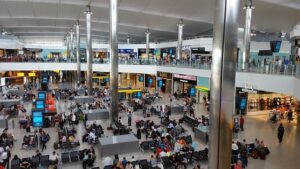 OTTAWA – Are you Canadian? Are you fully vaccinated? You still need to quarantine and get tested if you have to fly to England. If, on the other hand, you are American, or from a country of the European Union, no.

Vaccinated Canadian travelers were in fact excluded from plans to ease isolation restrictions for entry into England (and Scotland). The reason? No reason. The British authorities did not specify this. But they announced that travelers who have been fully vaccinated in the US or Europe will not be quarantined upon arrival, starting at 4 a.m. on August 2.

This essentially means that Canadians landing in England or Scotland must quarantine at home or in their whereabouts for 10 days and take a Covid-19 test after the eighth day. The other two countries that make up the United Kingdom – Wales and Northern Ireland – have not changed their rules, which means that even in these cases, Canadians still have to self-isolate upon arrival in the two states.

The British High Commission in Canada said the UK government is taking a “step by step approach” to ease travel restrictions. “Ensuring safe and open travel is a priority and we are coming to that with international partners on certification to ensure travel for vaccinated people is not hindered in the future,” the commission said.

Britain’s Secretary of State for Transport Grant Shapps said the new measures are meant to help family members visit one another and help businesses benefit from the increase in trade. “We have made great strides to reopen international travel and today is another major step forward,” said Shapps. “Of course we will continue to be guided by the latest scientific data, but thanks to our world-leading national vaccination program, we are able to look to the future and start rebuilding major transatlantic routes with the United States, further consolidating ties with our European neighbors “.

Michael Matheson, the Scottish Secretary of State for Transport, said the changes were made possible thanks to the success of vaccination programs in Scotland, the EU and the United States. “Fully vaccinated travelers will be able to travel to Scotland thanks to this significant easing of international travel measures, providing a boost to the tourism sector and the economy at large, while ensuring public health protection,” he said. And Canada? Curious that it is not at least put on a par with the US, where infections are decidedly higher.

In Vancouver on Wednesday, Deputy Prime Minister Chrystia Freeland was asked for a clarification. “I have great respect – he replied – for the sovereign right of each country to decide, during the pandemic, who can enter the country and under what conditions”.

But how much is Canada “worth” in terms of sightseeing in Britain? According to VisitBritain, Britain’s official tourism organization, travelers from Canada made approximately 874,061 visits to the UK in 2019. Travelers from the United States, on the other hand, made nearly 4.5 million visits, making the United States the First country for inbound visitors to the UK. France, Germany, Ireland and Spain complete the “top five”. Will it be a coincidence?

In a statement, a spokesperson for Global Affairs Canada declined to comment directly on the UK’s decision on quarantine exemptions “which is a decision made solely by the UK government. For further questions on this decision, please refer to the ‘High Commission of the United Kingdom in Canada “. Who, in fact, did not reply …

In the pic, Heathrow Airport in London (image by Rachel Moore from Pixabay)