Ford: there is no need to expand access to rapid tests in schools 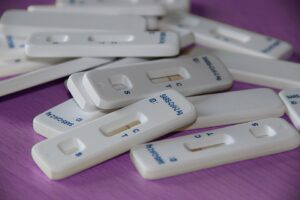 TORONTO – The Omicron variant already present in Canada and the upcoming holiday holidays do not worry Prime Minister Doug Ford at all. “There is no need for Ontario to expand access to Covid-19 testing,” he reiterated following increasing pressure to have these tests used by more people and in schools in the province.

Today, with 252 new infections, the institutes documented the record in terms of infections within twenty-four hours. So far this school year, the use of rapid tests for public school students has been scarce. They were not allowed to be used at all in schools until early October, even though private schools inexplicably got temporary access to tests from the federal stockpile one month prior.

Until now, these tests have been used when students return to schools that have been closed due to epidemics. Another 11 million rapid tests will be delivered to pupils in the province for use during the Christmas holidays.

The more than 33 million rapid tests received by the federal government, according to Ford, have already been distributed — virtually all of them — to test health workers, residents and staff in long-term care facilities, unvaccinated teachers, and employees of essential activities.

The problem is that outside of such contexts, it is difficult for an asymptomatic public member to access free Covid-19 tests of any kind in Ontario, rapid or not.

Tests in pharmacies and analysis laboratories are limited to people who show symptoms of Covid-19, high-risk close contacts of infected people and asymptomatic members of certain groups with fragile health conditions. Rapid tests can be purchased and performed at the pharmacy for a price between $ 17 and $ 40 per test.

But Ontario’s opposition parties, epidemiologists and doctors are calling on the Ford government to grant free public access to rapid tests.

Meanwhile, a petition calling for free access to rapid testing has so far collected 7,500 signatures.

Meanwhile, NDP leader Andrea Horwath and Green Party leader Mike Schreiner lashed out at Ford who, according to them, “by refusing to make rapid tests widely available is putting children at risk when schools are experiencing the peak of infections”.