“Catholic Education – Myths and Realities” and the TCDSB new website 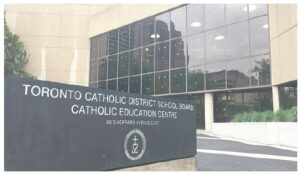 TORONTO – Corriere Canadese and CNMNG News Agency publish everyday articles about Catholic Schools in Canada and these publications receive comments from readers and provoke debate. Here below is an article by Lou Iacobelli, published on https://everydayforlifecanada.blogspot.com/

The Toronto Catholic District School Board recently posted its new website. We noticed that all lgbtq+ resources have been removed, except for the pride month activities. Why was the controversial Youthline link removed? We also noticed that the same link has been deleted from the parent newsletter at St. Anne Catholic Academy, school of virtual learning. Why do the people in charge at the school and the board no longer want parents to see the information?

This has been done during the Municipal election when new trustees are up for re-election or voted out. Are the people running the board no longer proud of the lgbtq+ resources they provided to children? Why did director Brendan Browne not want voting parents to know that he’s a “transformative organizational change leader.” That link to his biography is no longer there. Why?

They want feedback about the new website. Here’s mine. The TCDSB could take a Catholic education lesson from the Thunder Bay Catholic District School Board. Add the information we post today to the new TCDSB website. Catholic board leaders and trustees who aren’t prepared to defend and promote Catholic schools have no legal and moral right to be in those position. The same goes for Catholic union leaders and teachers. “Transformative organizational change leader” has nothing to do with Catholic schools.

Now the page from the TBCDSB:

Over the 160-year history of Catholic education in Ontario there have been groups and individuals who have called for the elimination of publicly funded Catholic schools. These attacks on our system have taken many forms, including books, articles, pamphlets, media advertisements, letters to the editor and recently an email petition campaign. Whatever the motivation of these groups and individuals, their arguments and the rationale for their position are similar and are often filled with myths and inaccuracies.

In order to assist our community to speak to these issues, we have provided the following list of common myths.

The Catholic system is a duplicate system that costs the taxpayers of Ontario hundreds of millions of dollars annually and should be amalgamated with the public school system to save money.

1. The Catholic system is not a duplicate of the public secular school system.

2. At the heart of Catholic education is the person of Jesus and the good news of His gospel.

3. We are a distinctly different faith-based system whose educational purpose is not only the transmission of knowledge but also the formation of the whole person, body, mind and spirit so that our graduates can contribute to the transformation of the world in the image of God.

4. Catholic ratepayers represent approximately one-third of Ontario’s tax revenue base and fund Catholic schools through their property, income, sales and other taxes.

5. Ontario went through a major amalgamation of school boards in 1998 and most economies of scale have now been realized. The history of school board amalgamations shows that amalgamating boards can in fact increase some costs. If all school systems amalgamated, the cost of salaries, benefits and services would rise to the highest level. In addition, a great deal of money would be required for employee buyouts and restructuring costs.

6. Catholic and public school boards already save taxpayers millions of dollars annually through a variety of successful business partnerships in such areas as co-operative school financing, purchasing, transportation, energy management and other shared services.

7. Bigger is not necessarily better. A recent study by the Ontario Secondary School Teachers’ Federation concedes: “It does not seem feasible … that a simple amalgamation of the 777 current schools in Metro Toronto with close to 22,000 teachers, 25,000 support staff and countless thousands of board administrative personnel would in any way be financially feasible, accountable or … acceptable to the citizens of Toronto”.

1. It is the constitutional mandate of Catholic schools to provide Catholic education to Catholic students.

3. Some Catholic school boards have policies that permit non-Catholic children to attend at the elementary level under certain conditions.

4. Catholic boards have the preferential right to hire Catholic teachers who can fulfill the responsibilities of a teacher in a Catholic school and who are knowledgeable about and committed to the values, goals and obligations of the Catholic education system.

5. A preferential hiring right is also extended to publicly funded social welfare agencies that are language-based, culturally-based, or religiously-based. This right is specifically protected by the Ontario Human Rights Code.

6. We do not believe that it is unjustifiably discriminatory to employ people who are committed to the purpose and goals of the Catholic school system. No corporation, organization or business hires people and promotes them unless they share the goals and objectives of the corporate culture of these institutions.

7. There are many non-Catholic persons employed by Catholic school boards as teachers, administrators and support staff who share the values of our system and contribute in meaningful ways to the mission of Catholic schools.

It would be easy to eliminate Catholic schools in Ontario based on the precedent set in Newfoundland and Labrador and Quebec.

1. Educational, cultural, political and linguistic conditions that existed in Newfoundland and Labrador and Quebec differ from those that exist in Ontario.

2. The Catholic school system in Ontario has been a successful part of publicly funded education for over 160 years.

3. All three political parties in Ontario are on record as supporting the Catholic school system as an integral part of publicly funded education in Ontario.

4. Catholic schools educate one-third of the pupil population in Ontario (more than 600,000 students) and are supported by over 2.4 million taxpayers and voters.

6. The majority of Ontario’s French language school system is Catholic and is supported by French parents and ratepayers whose rights are also constitutionally protected.

7. Attempts to eliminate Ontario’s Catholic schools would be highly divisive.

8. The elimination of Catholic school boards would be complicated, costly and would create unwarranted and unjustified chaos for students, parents, teachers and communities who are an integral part of our publicly funded school system.

Catholic schools result in social and ethnic segregation which undermines the development of tolerance and respect for Ontarians of different backgrounds.

1. Students from many races and cultures attend and learn together in Catholic schools, as they do in public schools.

3. Our students are taught to respect and affirm the diversity and interdependence of the world’s peoples, religions and cultures.

4. Graduates of Catholic schools make meaningful and important contributions to improving their communities as leaders in politics, business, healthcare, education and volunteer services.

5. Understanding other groups and other beliefs is an important part of the teaching in Catholic schools. Our schools have led the way in providing courses on World Religions.

Catholic schools are a successful part of publicly funded education in Ontario. Our schools and school boards consistently meet or exceed provincial expectations in student achievement, program delivery, class size and character development. Our curriculum is purposely designed to produce graduates with good moral character who are responsible citizens, caring family members and collaborative contributors to the common good of Ontario’s society. These are values that we celebrate and share with all Ontarians.

We encourage parents, neighbours, community leaders and all those who support the English and French Catholic school systems in Ontario to promote the good works and achievements of our students and teachers. Speak up for Catholic education! Ontario’s publicly funded Catholic schools are part of a 160-year tradition that has enriched generations and with the continued support of all of our Catholic partners and peers in education we will continue to educate and inspire generations to come.