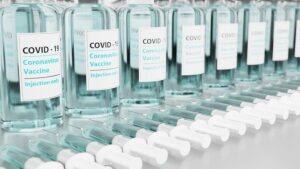 TORONTO – After the brief stalemate of recent months, vaccines now continue to flow continuously. This week Canada will receive about 5 million doses of Covid-19 vaccine. Five million that will bring the total number of doses received to 68 million, enough to administer two doses to all 33.2 million Canadians aged 12 years and over. Children under the age of 12 will have to wait for the completion of tests in this age group before they can be immunized.This week’s deliveries will include 3.6 million doses of the Pfizer-BioNTech vaccine and 1.4 million doses of the Moderna product.

The doses of vaccine sufficient to immunize all canadians entitled, in essence, there are but the problem remains that of being able to scratch the hard core of the no vax or at least of the undecided whose percentage is still high. Until Friday, 57.45% of Canadians aged 12 and over had been fully vaccinated and 79.66% had received at least one dose.

And vaccinations are the decisive element to convince the government to further loosen the restrictions: Ontario has moved to phase 3 of the roadmap for reopenings on July 16, five days earlier than expected. A passage, this, which has allowed the resumption of indoor meals and the reopening of gyms and theaters with capacity limits. Now, however, a turning point is needed to be able to enter Step 4: the Ford government has in fact stated that Ontario will remain in Step 3 for at least 21 days and until 80% of eligible residents aged 12 years and over have received at least one dose of a vaccine and 75% have received the second dose.

In addition, at least 70% of eligible residents in all public health units must be fully vaccinated in order for the province to move on to the final stage of the framework.

If all these requirements are met, Ontario could enter so-called Step 4 at the end of next week with the relaxation of most public health and occupational safety measures.

However, last week Ontario Chief Medical Officer of Health Kieran Moore recommended that 90% of eligible residents be fully vaccinated before entering the final stage, due to the risk of the Delta variant. “If about 20 percent of the population has not been vaccinated we will not build mass immunity and not all individuals who are vaccinated, especially those who are elderly or vulnerable or immunosuppressed, will get complete protection from the vaccine,” Moore said.

For weeks the pressure to be immunized is on young people: at the moment 64% of those aged between 12 and 17 years have received a dose while 40% are completely vaccinated. In addition, September is fast approaching and in view of the safe return to school both the government and health officials hope that children and teachers will be vaccinated. In essence, the one to vaccinations, it is a race against time.