A close two-way race shaping up in Milton 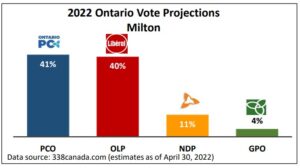 In one of the most diverse municipalities in the country, young families make up a significant portion of Milton’s electorate. Created in 2015, the provincial riding is situated in the Regional Municipality of Halton and encompasses the Town of Halton and the north-west portion of the City of Burlington. 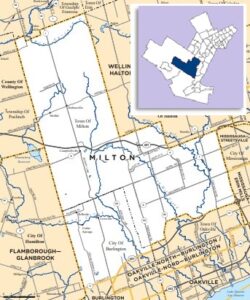 Due to its favourable location and proximity to the Niagara Escarpment, the district’s population, 114,095 (2016 Census), is rapidly growing. A considerable portion of residents are immigrants with some of the originating from the British Isles and East India. Italians are among the largest ethnic groups who originate from Europe. Statistics Canada shows 8,635 residents identify as Italian Canadian. That represents 7% of the district population.

This time around, candidate Sameera Ali aims to win the support of voters and take the riding over for the Liberals. Any outcome is possible come election day (June 2). According to the latest projections by 338Canada.com (April 30), the Liberals, at 40%, are just one point behind the PC. The prediction model, which uses algorithms that considers all major polls, shows the NDP at 11% followed by the Green Party of Ontario (GPO) at 4%. (See graph at the top of the article)

Other names on the ballot include Oriana Knox for the GPO and John Spina for the New Blue Party of Ontario. This Wednesday (May 4), the NDP will hold a nomination meeting to declare their candidate for the riding. 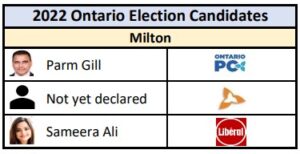 Candidates did not respond to our request for input at the time of going to print.