A strong lead for the PC in Barrie-Innisfil District 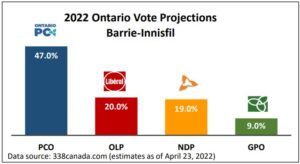 The electoral district of Barrie-Innisfil could be considered a gateway between Southern and Northern Ontario. It is situated along the south-west shore of Lake Simcoe, one of the largest inland lakes in Ontario, outside of the Great Lakes system.

Created in 2015, the district encompasses part of the County of Simcoe, the Town of Innisfil and the southern portion of the City of Barrie. A significant portion of constituents, 109,290 residents, are of European origin, primarily British. 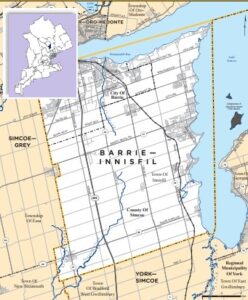 Geographically, the riding offers the best of “both worlds”: comfortable urban living with a mix of small lakeside communities approximately 100 km north of Toronto.

It has also been an ideal place for immigrants to set down roots. According to the 2016 Census, 9,570 residents self-identify as of Italian origin. That represents 9% of the district population. 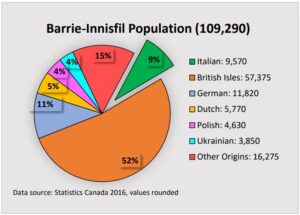 Current MPP, Andrea Khanjin, as a member of the PC, is seeking her second term in office. Elected in 2018, she won with nearly 50% support from the electorate (22,121 votes). Pekka Reinio, the NDP candidate, took 28%, but the PC’s margin of victory was 9,460 votes. The Liberals attracted only 12% of the vote.

This is the second time that Khanjin, Reinio and candidate Bonnie North for the Green party of Ontario will face off in a general election. Meanwhile, the Liberals have yet to declare a candidate for the riding. 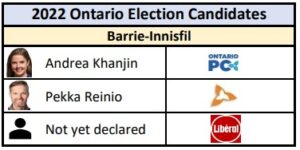 With five weeks to go before election day (June 2), things appear headed for a similar outcome as that posted by the parties in the last election. According to the latest projections by 338Canada.com (April 23), the PC are in the lead at 47%. The prediction model takes into account all major polls. It places the Liberals at 20%, followed by the NDP at 19% and the Greens further back at 9%. (See chart at the top of the article)

When contacted, MPP Khanjin acknowledged the vibrancy of the community. “The riding has been growing in population and diversity, bringing more expertise and opportunities as well as a growing demand for well paying jobs” she told the Corriere.

She expressed her focus: “to be the voice of our local residents and businesses to receive significant investments that create jobs and drive economic growth in our riding, secure funds for local infrastructure and healthcare needs, and make our communities more affordable while respecting tax payers’ dollars”.

The other candidates did not respond to our request for input prior to our going to print.