A tenacious time ahead for Pakistan 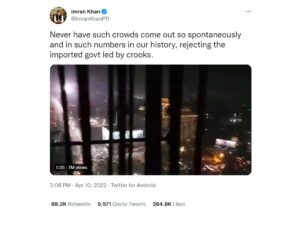 TORONTO – How do you perceive Pakistan’s political situation without PM Imran Khan? Do you think the opposition now can deal the ongoing protests against them? Apparently that is improbable.

Because, two subsequent tweets from Imran Khan in over 24-hours testify that, “Thank you to all Pakistanis for their amazing outpouring of support &amp; emotions to protest against US-backed regime change abetted by local Mir Jafars to bring into power a coterie of pliable crooks all out on bail. Shows Pakistanis at home & abroad have emphatically rejected this.” Then, “Never have such crowds come out so spontaneously and in such numbers in our history, rejecting the imported government led by crooks.”

As witnessed one of these protests, right here in Toronto at Dundas Square in Canada on Sunday, where thousands of exuberant Pakistani expatriates chanted: “Hang those crooks, hang those traitors.”

How has Imran Khan changed the nation at this juncture? Can we comprehend his political mystery? No doubt, Pakistan is full of traitors and only one leader stands tall amongst them like the Greek mythological Kolossós tes Rhódou. That symbolizes he can redeem them from conspiracies inlayed in the capital of a superpower against the Kolossós himself as claimed.