After Sanremo’s Festival, the italian band Maneskin conquers Europe: first in the Eurocontest. Polemics on socials 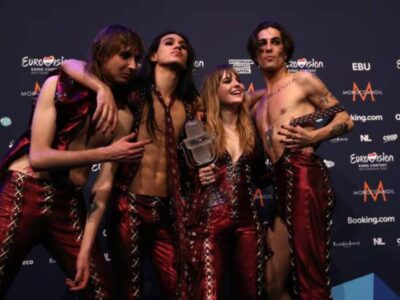 ROTTERDAM – After thirty-one years, the most important European music prize returns to Italy: the Maneskin (in the pic), already winners of the last Sanremo Festival, have won the Eurovision Song Contest 2021.

The rock-band from Rome, which participated with the song ‘Zitti e buoni’, brought back to Italy the title that was missing since 1990 when Toto Cutugno won with “Insieme: 1992” (before him, only Gigliola Cinquetti in 1964 with “Non ho l’età” had managed to bring the award to Italy).

Damiano David (vocals), Victoria De Angelis (bass), Thomas Raggi (guitar) and Ethan Torchio (drums), who have been playing together since 2016, when they started performing in the streets of Rome, with their hard rock song they triumphed with 524 votes, 318 of which received from televoting. Second classified of the event staged yesterday (22th May 2021) at the Ahoy Arena in Rotterdam, Holland, is France with 499 points, Switzerland third with 432.

“It is incredible to win with a song like that. We won because so many people from home voted for us, it is incredible. We want to thank everyone who supported us, we are honored. We have had so many votes from the audience, this is of enormous value” said the four boys in the press conference.

“Everything we’ve done since we started playing on the street now makes sense. For us it has a huge significance to get recognition at this level, as we play the music we like” added the singer. “Now we are done with the singing competitions, too much anxiety … let’s go on with our music, we are working on the new album that will be released by the end of the year and in December we will start with the tour”.

The Italian band also received the compliments of the Italian government via Twitter. “Congratulations to the Maneskin winners of Eurovision”, reads the tweet posted on the official profile of Palazzo Chigi.

But the victory had a controversial aftermath, highlighted above all by the foreign press. The Maneskin singer was in fact portrayed with his head bowed on a table in the Rotterdam arena and the attitude was associated with the use of cocaine. “I don’t use drugs, we broke a glass” the singer said at the closing conference (watch the video with the “offending” image and Damiano David’s reply, here: https://youtu.be/BKlnDyYYyzo). His words, obviously, were not enough. And Eurovision has taken an official position.

“We are aware of the rumors related to the video” which concerns “the Italian winners of the Eurovision Song Contest”. The band strongly denied the allegations of drug use and the singer in question will undergo a voluntary drug test after he arrives home.”.

The Maneskins actually asked for the test “last night but it was not possible to organize it immediately”.

Watch here their performance at the Eurovision Song Contest 2021

Read our article about Maneskin at Sanremo’s Festival: Maneskin, rolling stones on the stage of Sanremo