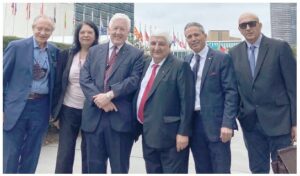 TORONTO – “I thought it was a wonderful way for the Abraham Global Peace Initiative (AGPI) to launch itself and ’present its credentials’ to the international community”, remarked Dan Montesano, member of the Board of Governors of AGPI. He was commenting by phone on the significance of the AGPI’s decision to present its first Annual Human Rights Award in New York on Wednesday, October 6, 2021, to Canada’s UN Ambassador, Bob Rae.

Mr. Montesano was a member of the delegation assembled by Avi Benlolo, founder and Chairman of the AGPI. Mr. Benlolo’s enthusiasm was infectious. “Ours is a new global human rights organization with a mission to advance human rights, peace and democracy and combat racism and intolerance… what better way to launch its global footprint [than] in New York by meeting with Permanent Representatives of a number of nations and with various UN officials including the Office of the High Commissioner for Human Rights,” he affirmed in rhetorical fashion.

The Delegation was hosted by Canada’s Mission to the United Nations and attended by several high-level representatives and Ambassadors from the greater Middle East and Europe, including the Ambassador from Italy, HE Maurizio Massari.

The Honourary Chair of AGPI, Paul Godfrey (who is also the Chair of the National Post), underscored the second purpose for the delegation, specifically, to “bestow upon Ambassador Bob Rae our highest honour for his work in advancing human rights… in recognition of Ambassador Rae’s exceptional championship of human rights throughout his career.”

“Our organization aspires to carry Canada’s message to the world, to become a moral compass for pluralism, justice and human rights for all. Over the course of the next number of years, our objective will be to bring the world together under one tent,” said Avi Benlolo, AGPI’s Founder and Chairman.

The Abraham Global Peace Initiative’s mission and mandate is to assist, encourage and promote, whether on its own or in conjunction with others, the advancement of human knowledge and understanding through the study of and research into international human rights, fundamental freedoms, democracy, global peace and civil society in Canada, Israel and around the world.

There is a practical side to the AGPI as well, said Dan Montesano. We were able to have breakfast with Eric Adams, the Democratic candidate for the Mayoralty of New York, arguably the World’s most influential city. 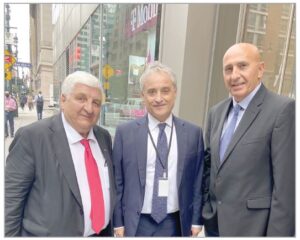