An apology, an Exoneration and an Investigation at YCDSB 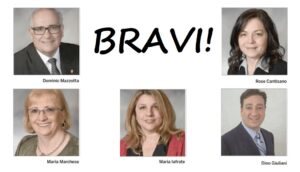 TORONTO – The toxic, dysfunctional environment at York Catholic District School Board appears to have been resolved, at least for now. Tuesday, after months of push-back, the Chair of Board entertained a Motion to discuss allegations of discrimination and ethnic-based harassment against five trustees of Italian background as a breach of Conduct.

In essence the motion asked the Chair to consider a breach of Code of Conduct and its procedures by trustee McNicol, the perpetrator, and to have the Board vote on that finding.

Trustees voted unanimously in the finding of guilt, on the sanctions (to present a written apology , specifically to trustee Mazzotta and to the Board, at the next meeting of the Board) and in the decision to ask the Minister and the Ministry to conduct an independent investigation into the allegations presented by the Five trustees. Mc Nicol could neither participate in nor vote on the Motion due to her conflict.

The business of the Board, together with its education-related decisions were ground to a halt when the five (trustees Cantisano, Giuliani, Iafrate, Marchese and Mazzotta) made good on their promise to absent themselves from Board meetings. Those abstentions deprived the Board of the quorum needed to approve decisions and return the governing body to functional normality.

Initially, the Chair Elizabeth Crowe, stood by trustee Theresa McNicol whose actions and statements had prompted the allegations as well as a “police inquiry” into their veracity. There was none, but the Chair and two other trustees (Cotton and Wigston) held fast with McNicol. In so doing, they risked tarring themselves and the YCDSB with the same anti-Italian brush.

A further risk could include the Minister and the Deputy Minister (the Ministry) in what was becoming a sordid affair in Education in a regional municipality where Canadians of Italian origin represent the majority of Catholic school students. In the western part of York Region – Vaughan – they are just under 40% of the total population (as per 2016 Census). Minister Lecce represents King-Vaughan in the Ontario Legislature.

When contacted by The Corriere via e-mail, a spokesperson from the Ministry, speaking on background made it clear that there would be no tolerable grounds on which discriminatory behaviour could be tolerated by the Government or its Ministries. That message must also have been delivered to the Chair and the Director who, at the September 20, indicated they had sought “advice and direction” from the same people.

On September 28, after the Board meeting, a letter containing the approved motion was delivered to Minister Lecce and Deputy Minister Naylor:

“Discriminatory Comments to the Italian Heritage THAT the Board formally contact the Ministry of Education requesting that a public inquiry be immediately conducted regarding discriminatory comments made by a sitting Trustee about Trustees of Italian Heritage. I request an urgent response to this request”.

From the perspective of the Corriere, the resolve of Cantisano, Giuliani, Iafrate, Marchese and Mazzotta was commendable, indeed praiseworthy, their conduct classy and their professionalism exemplary throughout this regrettable exercise. It is a lesson for everyone. But, they are the only ones who paid the immediate price.

It is unfortunate that four of them (Cantisano, Giuliani, Marchese and Mazzotta) decided not to offer again. They and Iafrate have provided a role model for others to follow.