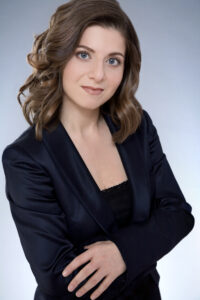 It is no exaggeration, therefore, to define a milestone the album “Stimme aus der Ferne – A Voice From the Distance” (released on May 14, 2021 on Céleste Music) by Andrea Botticelli (in the pic above), Canadian pianist “proudly of Italian origin” – as she tells us – who boasts an impressive curriculum: Andrea engages in instruments of the past such as harpsichord, clavichord and fortepiano and thanks to her performances on these very particular ancestors of the piano she has received prizes and scholarships from the Banff Center for Arts and Creativity, Canada Council for the Arts, Early Music America, National Music Center, Ontario Arts Council, Stingray Music and Wirth Institute for Austrian and Central European Studies.

Her ability to revive each of those instruments results in performances with a unique sound and an individual expressive style, qualities she has demonstrated in concerts held – in past seasons – across Canada on 18th and 19th century fortepiano models.

But Andrea is not only a performer. She teached and lectures on fortepiano performance practices at the University of Toronto and the University of Western Ontario where she teaches “historically informed pedagogy”, introducing students to all historical keyboard instruments.

“I use historical instruments – Andrea explains – as interpretive tools to closely inhabit the original sound world of composers and their respective historical periods. This approach creates performances with a unique sound for modern audiences and inspires renewed creative and interpretive energy. Performances using this novel approach are often less predictable and the results are more inventive”.

When did you decide to use instruments of the past such as harpsichord, clavichord and fortepiano?
“I grew up studying the modern piano, but when I was lucky enough to try a harpsichord and fortepiano at a music festival, I was immediately fascinated. I was struck by how each historical instrument speaks in its own individual voice! I also thought it was refreshing and revelatory to hear music that I thought I knew well, played with a striking, fascinating, and ultimately convincing sound. I felt I understood more about the music and the composers’ intentions by playing on these instruments”.

Was / is it difficult to find such instruments today? How did you do it?
“There are museum collections with original antique instruments that can be visited and a growing body of research by performers, musicologists, and organologists studying primary sources from the time. I have visited and studied on instruments that have been restored and faithfully reconstructed by artisans that have revived the skill of building these instruments – truly as works of art! The fortepiano that I used was built by Rodney Regier in Freeport, Maine from the fortepiano models from c.1830 of the Viennese builder, Conrad Graf”.

How do you choose the composers / compositions to perform?
“I try to marry the musical compositions as closely as possible to the instrument that I am using. The repertoire on the album was carefully chosen to highlight the Banff fortepiano’s unique expressive capabilities. First of all, I chose lyrical music that I really love! I also wanted to showcase the music of a range of composers; each piece reveals how they used the sonority of the instrument in their own way. The pairing of the last two pieces by Clara and Robert Schumann was my way of highlighting their deep human and artistic connection”.

The title of the album itself (“Stimme aus der Ferne – A Voice From the Distance”), in fact, refers to an indication written in the score of the Novellette by Robert Schumann. “Amid a tumultuous and highly varied movement, the music suddenly becomes tender and intimate. The lyrical melody from the Notturno by Clara Schumann becomes the “voice from the distance” that Robert quotes, as though the beloved theme drifts into his mind as he is composing: a poetic illustration of the presence of Clara, in thought and in music. This concept of creative synergy is also very much reflected in the repertoire of this disc. In addition to Clara’s theme, the phrase “a voice from the distance” alludes to the sound of the fortepiano evoking a faraway musical past”, reads in the notes written by the artist herself to present the album and published on her website (here: https://www.andrea-botticelli.com/recordings).

What do you think of classical music of the late twentieth century and contemporary?
“I enjoy performing works from my time and works by living composers very much and it is important to have experience with this as well”.

Have you ever composed – or thought about doing so – original music?
“I have taken theoretical studies in music school and I do have some more recent experience with Classical improvisation”.

You are of Italian origin. Can you tell us something about your family?
“I am a proud first-generation Canadian of Italian heritage. My father was born in Albano Laziale in Lazio and my mother was born in Roccacasale, Abruzzo. They both moved to Canada and met in Toronto. My father’s side of the family remains in Italy. I grew up speaking Italian with my family (mostly with my grandparents that didn’t speak English) in a tight-knit Italian-Canadian community. I greatly value my Italian heritage as a rich and proud culture unto itself, but also the experience of growing up bilingual and having the advantage of a different cultural and linguistic perspective”.

Have you ever been to Italy?
“I have been on many trips to visit family in Italy, I enjoyed a summer of high school Italian study, I study the rich Italian Classical music tradition, I have taken university courses in Italian literature, film, and history, and I try to keep in touch with the popular culture. I also try to impart that culture and the Italian language to my young son”.