Anti Catholic Bigotry is a Real Problem in Canada 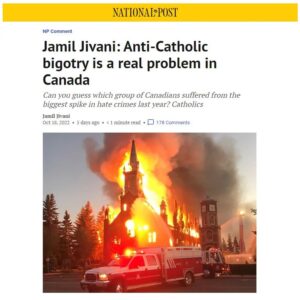 TORONTO – We borrowed the headline from a column written by Jamil Jivani, a writer/broadcaster/lawyer, for the National Post last October 18 (in the pic above, the article on National Post’s website). He went on to say that Catholics, as a group of Canadians, “suffered the biggest spike in hate crimes last year”. He supports his premise with facts. Mr. Jivani is a reputable and consistent advocate for balance, equity and inclusion. He is also a member of a  visible minority.

The Canadian Press news agency, on which many in the Mainstream Media rely for news, on October 22, came out with a headline: Ontario municipal candidates face ‘organized hatred’ as campaign nears close. The author of the piece, Holly McKenzie-Sutter, claimed that “With voting day set for Monday in municipal and school board elections across Ontario, some candidates are facing intense, hostile rhetoric as they put their names forward on local ballots”. Who are those haters?

The CBC, recipient of $1.5 Billion annually from the public purse, aired and published this “gem”: Scores of anti-trans candidates running in Ontario school board elections. This “alarm” is sounded by the writers, Jonathan Montpetit, Lori Ward. They are concerned that “With support from several conservative groups, some candidates are vowing to end inclusive sex education”.

Montpetit, Ward and the CBC probably do not know that Statistic Canada has published demographic results of the 2021 Census which put the heterosexual population at 99.66% of the total. Perhaps those Canadians want to keep what they have earned for their progeny. Without necessarily discriminating against the 0.00333 who may be non-binary.

Unfortunately, Montpetit, Ward and their editors seem to regret/resent “conservative” people who are not part of the non-binary one third of one percent. Of the Canadian population.

Most, though not all, those “conservatives” are associated with Catholic/Christian organizations because their religion frowns upon the encouragement of non-binary sexual behaviour. Moreover, they resist such programs because they pre-empt parental authority when it comes to teaching sexual morality.

Catholic schools regard such sex education as programs and not rights. Moreover, the constitution enshrines their right to follow their religious guide. Trustees have no authority to take them away or to interpret how those rights should be applied in a classroom or school environment.

These are legitimate political positions; they are not hate-mongering. Parents have an obligation to select trustees who will protect their Constitutional rights. It will not be anyone proposed by the CBC, or partisan party hacks.

In Toronto, the Corriere (hardly a conservative organization) has applauded the value of candidates like Mazarakis, Rodriguez, Del Grande, Lubinski, Christiano, Tanuan, and Crawford. We also like D’Amico, Di Giorgio and Martino. And we urge the expulsion of Li Preti, De Domenico and Rizzo. These three are hate-mongering anti-Catholics and bad for education, religious or not.

We have been as firm in Halton where the best thing that could happen would be the rejection of trustees like Duarte, Agnew and O’Hearne-Czarnota and anyone supported by “haters” in the Halton Parents for Change. On the positive side, there is hope offered by Iantomasi and Karabela.

York has its own set of challenges with the resignation of some experienced and competent trustees, but Catholic electors will be well served by Iafrate, Saggese, Di Meo, Fracassi, Alexander and Grella.

Our children and grandchildren rely on you voting out the bad and voting in the good. Monday, 24 October, is a crucial day for them. Vote!