As statue of Ryerson thrown into harbor water, now they call it “X University” 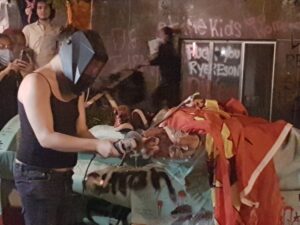 Toronto, May 7: The statue of Egerton Ryerson, considered one of the architects of the residential school system in Canada, that stood outside the university that bears his name was toppled and vandalized last Sunday evening following a demonstration and eventually thrown into harbor water in downtown Toronto.

Basically in response to the announcement by the Tk’emlúps te Secwépemc First Nation on May 27 that preliminary findings from a survey conducted by a specialist in ground-penetrating radar indicated the remains of what could be 215 children buried on the site of a former residential school in Kamloops, B.C., the demonstrators get engaged to bring down the statue.

In a statement issued at early morning today, the university’s president, Mohamed Lachemi, said that the statue “will not be restored or replaced.” The future of the statue was being considered by a task force whose mandate includes “consideration of the university’s name, responding to the legacy of Egerton Ryerson, and other elements of commemoration on campus. I ask our community to respect their work and to engage with them as we should engage with all matters at our university — through dialogue, debate and the exchange of ideas,” Lachemi said.

To him, more than 1,000 people took part in the afternoon protest that began at Queen’s Park and ended on Gould Street. “About an hour after the last of the people left, a truck arrived on Gould Street and proceeded to pull down the statue of Egerton Ryerson. We are relieved that no one was injured in the process,” he said.

However, Craig St. Denis, a Cree and whose grandfather was in the residential school system was at the university campus where crowds gathered after the statue came down, said its toppling “marks the beginning of healing for an entire nation. It’s important this statue has come down so we can raise awareness to what has been going on since the 1800s and the incorporation of the residential school system.”

Similarly for one of the rally organizers, Samantha, a Métis said earlier to this reporter that, “Ryerson was the architect of residential school system, which led to segregated school for both Black and Indigenous children, that mainly led to the Indian residential school in Canada and led to cultural genocide and other issues within the Indigenous dealing with the stay. And in terms of the statue and I think it needs to be removed as it’s a symbol as oppressive and violence and has a lot of significance for community members in terms of its negative representation and it needs to be taken down.”

Meanwhile, following the Kamloops discovery of the 215 children, Indigenous students at the university called on fellow students, faculty and alumni to stop using the name Ryerson in their email signatures, correspondence and on their resumes, urging them instead to call the school “X University”. 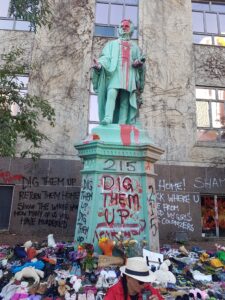 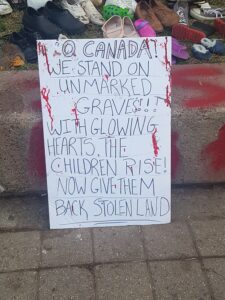