Avalanche of infections, possible pandemic’s beginning of the end 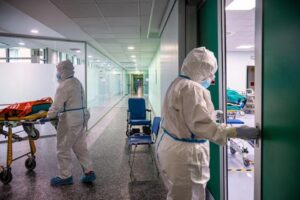 TORONTO – As the days go by, the epidemiological picture of this Covid-19 pandemic becomes increasingly clear. Here in Ontario, Canada, Italy and the rest of the world, the Omicron variant is causing an avalanche of infections that has no precedent in the last two years.

According to the latest data, in the first 40 days in which the new strain was identified in Canada, 777,609 positive cases were recorded – a number that is also very underestimated compared to the real penetration of the contagion – a rate of infections that far exceeds all the cases recorded in 2020, the first year of the pandemic. All this is also fueled by the fact that, as shown by a study published yesterday in South Africa, asymptomatic people infected with Omicron are much more contagious than those positive for Delta and other variants.

The contagion grows exponentially, fortunately attenuated by vaccination – which at least prevents most of the time from developing serious symptoms – with a rate of increase that corresponds to what Anthony Fauci had predicted: the number of positives doubles every 2-3 days. In the United States only today more than a million people were infected with Omicron, while in Europe the World Health Organization has certified how, between now and mid-March, the new wave will have infected one in two people.

“It is estimated – said the WHO Regional Director for Europe, Hans Kluge, during the press conference on epidemic updates – that more than 50% of the population of the European Region will be infected by the new variant in the next 6-8 weeks”.

The European region, Kluge continued, “recorded over 7 million new cases of Covid reported in the first week of 2022, more than doubling in a two-week period”. “As of January 10, 26 countries have reported that more than 1% of their population has become ill every week,” he added.

On the hospitalization front, Kluge continues, “let’s take the example of Denmark, where Omicron cases have exploded in recent weeks: the hospitalization rate for Covid-19 in unvaccinated patients was 6 times higher than vaccinated in the Christmas week. And data from the UK’s obstetric surveillance system shows that 96% of pregnant women admitted to hospital with Symptoms of Covid-19 between May and October 2021 were not vaccinated, one in 3 needed respiratory support.” These are the cases illustrated by Kluge to “reiterate that the currently approved vaccines continue to provide good protection against serious illness and death, including for Omicron”.

If even in Canada the pace of infections will continue with the same force, we will find ourselves in the spring with half of the population coming into contact with Omicron: between infected and vaccinated, there will be very little room for a new possible wave of Covid-19. According to some virologists, this scenario would be the antechamber of the end of the pandemic. A collective hope to be cultivated all together, after two very long years of Covid-19.