Avi Benlolo: “Minister Khalid must apologize to the Jewish community” 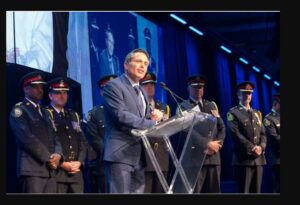 TORONTO –  Italian daily newspaper Corriere Canadese received a letter from Avi Abraham Benlolo (in the pic above), Founding Chairman and CEO of The Abraham Global Peace Initiative, addressed to Prime Minister Justin Trudeau. Here below is the letter.

We wish to express our disappointment and demand an apology to the Jewish community from one of your members of parliament in the Liberal Party, Minister Iqra Khalid. Yesterday, a group calling itself “Canadian Defenders for Human Rights” tweeted a picture of the Minister alongside a man who was holding a poster that read, “Palestinian Holocaust made by Zionists” presumably in reference to the situation in Gaza and Israel.

We are shocked that a Canadian minister would appear to stand by the comparison of Gaza to the Holocaust. Academics refer to this narrative as “Holocaust inversion” which is steeped in Antisemitism and in Holocaust denial itself. It infers Jews or “Zionists” are the new Nazis and this inversion is embedded in graphic cartoons all over the Arab world and especially in the Iranian press. In fact, the word “Zionists” when used in this fashion is the epitome of Antisemitism, used as a cover to accuse Jewish people of various crimes.

Given the fact that Minister Khalid is a member of the National Security and Intelligence Committee of Parliamentarians, we are concerned that the minister might unintentionally foster an impression that our government is sympathetic to the Palestinian Islamic Jihad, designated by Canada as a terrorist group. As you are aware, the group has been firing rockets indiscriminately into Israeli civilian population centers over the last number days. For its part, Israel has been conducting targeted strikes at the terrorist group and its assets, to remove the impending threat to its citizens.

Obviously, we do not presuppose that Minister Khalid agrees with any of the above sentiments. It’s also very possible that the minister had not read the text on the poster before posing for this picture. At the same time, it is incumbent on you as Prime Minister to ensure there is appropriate clarification and an apology to the Jewish community and Holocaust Survivors and their descendants with respect to the Holocaust comparison. This is important given the fact that Antisemitism levels in this country have climbed to unprecedented levels.

On behalf of everyone at AGPI, we look forward to your reply,