Back in the classroom but everything is as before 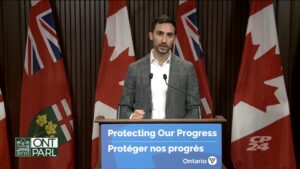 TORONTO – Ontario students will receive two rapid antigen tests when they return to class next Monday, but other than that, the government’s plan rests primarily on previously announced measures to keep schools safe during the Omicron wave. The pillars of his plan to return to school on January 17 are updated screenings, new deliveries of quality masks, ventilation improvements, vaccinations, new hires. The vast majority of the measures included in the plan had previously been announced.  In short, nothing new.

After a long wait, today the Minister of Education of Ontario Stephen Lecce held a press conference – one of the most awaited – to reassure parents and teachers but it was a bit like listening to a broken record.

Lecce said the province has “valid measures in place,” which are “fully supported” by Chief Medical Officer of Health Kieran Moore. “We firmly believe that children should go to school,” Lecce said before announcing that students and staff in schools and nurseries will each receive two Covid-19 rapid tests after schools return to face-to-face teaching.

The tests will be distributed starting next week first to staff, then to kindergarten children and public elementary school students, followed by high school students. Dr Moore said more test kits will be provided when supply allows.

People with symptoms must use two tests 24-48 hours apart and can return to school after negative results once their symptoms improve.

In the technical briefing, Lecce and Moore also said that school principals will be tasked with monitoring absenteeism in classrooms and will not have to rely on individual tests. “Local principals and public health units will notify parents when absences reach a level of about 30% – said the Minister of Education – the school board, the principal and the local public health unit will consider, but will not automatically request, to return to distance learning”.

This school year, the province will disclose relative absence rates in schools and will also publicly report closures, but will not report the number of confirmed cases of Covid-19 documented in schools.

To reinforce previous efforts to reduce the transmission of the virus in schools, all staff will be provided with high-quality PPE, no contact sports or music lessons will be held indoors. “Waiting to receive up to 119 million rapid antigen tests in the coming weeks – the vast majority of which will be needed in the health system and care facilities – schools and nurseries will receive 3.9 million tests this week and 1.2 million next week,” Lecce said.

Dr Moore said he was “pleased” that the children are returning to school and praised parents and children for their understanding and patience during the last period of online classes: “What we asked you was not easy, so I thank you,” he concluded.

“We call for concrete action to make schools safe and vaccinate children – was the hot comment of NDP leader Andrea Horwath – let’s start with school clinics, awareness-raising activities, the mandatory vaccine for teachers and and with smaller classes” while liberal leader Steven Del Duca said that “Ontario liberals continue to ask Doug Ford to be transparent about deliveries to schools of HEPA filters and of N95 masks. This information should be publicly available to all parents with children in schools.”