Baseball: Alessandro Volpe earns on the Azzurri’s Team for the European Championships and the World Cup 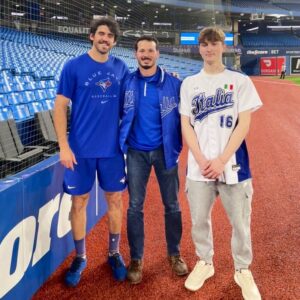 TORONTO – Alessandro Volpe, a 17 year-old Italian-Canadian baseball player, has been called up by the Italian Under 18 National Team to take part in the European Championships to be held in the Czech Republic from August 13 to the 20th. It’s a big deal.

Notice of the “call” came directly from Andrea Marcon, President of the Italian Baseball and Softball Federation. “Dear Alessandro Volpe – reads the letter sent to the Italian-Canadian talent – I am pleased to inform you that your name is included in the list of athletes chosen to represent Italy at the next European Championships, which will be held in Ostrava and Brno (Czech Republic), from August 13 to 20th. Congratulating on your call-up. Please accept my most cordial greetings”. Additional information to follow.

In April, Alessandro was among 33 young men called up to the “try-out” for the Italian Under 18 Baseball National Team. He went in Italy for a series of trainings and trials. Now he has received confirmation of his success from the Azzurri’s Team. The same team will also compete in the World Cup, slated for September, in Florida (USA).

Alessandro wrote on Twitter: “I have just been named to Italian National U18 Baseball Team! I want to thank my parents, my family, my Canadian coaches, my teammates & my Italian coaches for believing in me”.

Our best wishes go to Alessandro. We have scheduled a more complete article for Sunday’s edition.

In the pic, Alessandro with Gianmarco Faraone (National Teams and Coaching Staff Coordinator of the Italian Baseball and Softball Federation) and “the closer” for the Blue Jays, Jordan Romano