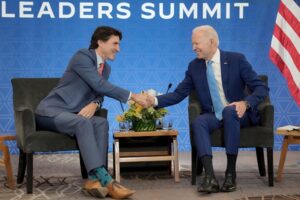 MEXICO CITY – More weapons to Ukraine and the visit of the US president to Canada: these are the main news that emerged from today’s meeting between Prime Minister Justin Trudeau and Joe Biden, as part of the summit of US leaders in Mexico City.

The Office of the Prime Minister (PMO) has announced that Canada will purchase a US-made missile defense system for Ukraine: it is a NASAMS surface-to-air missile system (National Advanced Surface-to-Air Missile System) designed and jointly developed by the American defense company Raytheon and the Norwegian Kongsberg Defense & Aerospace.

Canada has so far provided more than $3.4 billion in military and humanitarian aid to Ukraine since Russian President Vladimir Putin ordered an invasion of the country in February 2022. The NASAMS purchase adds to the help already sent.

During the meeting, Biden said in turn that he “can’t wait to travel to Canada in March of this year”, in what would be his first trip to the nation since he became president of the United States, but details of the visit were not disclosed.

Biden last visited Canada in December 2016, when he was a vice president in the Obama administration. The last time a sitting American president was in Canada was when Donald Trump traveled to Quebec for the G7 leaders’ summit in June 2018. Canada is normally one of the first foreign destinations for a new US president, but Biden’s visit was delayed due to the Covid-19 pandemic: Biden was in fact elected president in late 2020.

During their meeting, Biden and Trudeau then discussed economic competitiveness and growth, climate commitments, security, defense and trade with particular reference to North American supply chains, including critical minerals and semiconductors. Precisely on trade, Trudeau reiterated the advantages of free movement between Canada and the United States.

Among the topics addressed, also the program for “trusted” travelers known as Nexus, partially closed since the beginning of the pandemic but which is now reportedly making progress.

In addition, the two leaders spoke on regional and global issues, including the war between Russia and Ukraine and the instability in Haiti: for the latter country, Trudeau and Biden confirmed their mutual commitment to work together to support solutions led by Haiti, promote dialogue towards democratic elections and improve effective law enforcement capacity. Leaders also pledged to continue bilateral support for Haiti and its people.

The Canadian prime minister and the US president also discussed irregular immigration and their mutual commitment to address the climate crisis. China and Iran are also on the table, in particular the Iranian regime’s continuous attacks against women and students and the issue of flight PS752 shot down by Iranian missiles: Trudeau underlined the importance of continuing to work to guarantee the families of the victims the justice and the responsibility they deserve.

In the pic above, Trudeau and Biden during the meeting (photo Twitter – @POTUS)