Bill 124, unions and government challenge each other in Court 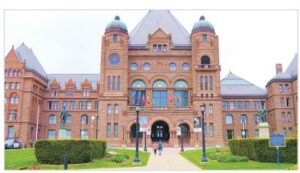 TORONTO – The challenge is now before the Superior Court of Justice where hearings began today for controversial Bill 124, the law passed in 2019 that limits salary increases to one percent per year for Ontario public service employees and general public sector workers, including nurses and teachers.

The leaders of six unions decided to confront the Ford government arguing that the bill “is unconstitutional and, from the moment it was introduced, has had a devastating impact on workers”. “Today marks an important milestone in the fight against Bill 124. This legislation on wage repression has attacked fundamental trade union rights in Ontario – said the president of the Ontario Federation of Labour Patty Coates – Bill 124 represents a blatant attack on free and fair collective bargaining. It interferes with this constitutional right and tilts the balance in favor of employers even before the parties sit down together at the negotiating table.”

A bill, this, which was to remain in force for three years while the new contracts were negotiated and which was intended to help eliminate the deficit.

Unions representing teachers, nurses, public service employees, universities and their lecturers as well as numerous other professions, argue that the bill violates the section of the Canadian Charter of Rights and Freedoms that protects collective bargaining. “Bill 124 imposes restrictions on all forms of compensation and undermined nurses’ bargaining power during a crisis of skilled labor shortage, exacerbated by a global pandemic,” Ontario Nurses Association lawyers wrote in its court-filed factum, “by repressing wages and limiting or denying frontline health workers the support they need to do their jobs, the Ford government has further worsened a terrible situation”.

On a war footing is also the union representing Catholic teachers according to which the bill “uses legislative powers to avoid bargaining in good faith the most fundamental term for teachers: the compensation they receive in exchange for their work”.

The province, for its part, not only maintains that the bill does not violate the Charter of Rights and Freedoms but also believes that it does not interfere with meaningful collective bargaining and does not prevent negotiations on pay.

According to the government, the law balances the interests of public sector workers who want wage increases with taxpayers who pay for those increases and citizens who rely on the critical services of those workers.

Moreover, the province, which wants to close the case, argues that the court “should not affect the matter, as a political one”.

The parties are distant, it will now be the Superior Court of Justice to assess the validity of the arguments of the government and trade unions regarding a law that, to say the least, has overheated the spirits.