Bill 125, the unions lose the challenge with the government 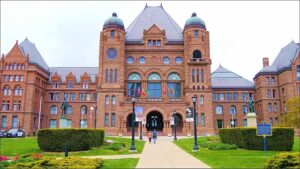 TORONTO – The constitutional rights of public sector workers engaged in negotiation are not violated by Bill 124 which imposes a wage cap in Ontario.

This is what was established by the Superior Court of Justice. The government of Ontario sings victory. This is not the case for groups representing hundreds of thousands of public sector employees who have challenged the constitutionality of Bill 124, a law passed in 2019 that limits wage increases to one percent per year for Ontario public service employees and public sector workers in general. A Bill, this, which affects over 700,000 workers in the province.

During the hearings that began a week ago, the Superior Court of Justice heard from trade unions representing, among others, government workers, teachers, nurses and university lecturers. They argue that Bill 124 represents a blatant attack on free and fair collective bargaining by interfering with this constitutional right. In essence, it would violate the Canadian Charter of Rights and Freedoms.

The province takes the opposite view, according to which the Charter protects “only the bargaining process and not the outcome”. “This is what the law does,” said government lawyer Zachary Green, “within that substantive constraint on how your salary may be at the end of negotiations, the parties remain free to engage in a meaningful bargaining process.”

The provisions contained in the controversial Bill 124, according to the government, were to remain in force for three years as new contracts were negotiated. This would have been, according to Ford’s conservatives, a temporary measure put in place to help eliminate the deficit.

“These measures are exceptional and limited in time – added Green – in other words, they are not the new normal, they are temporary measures necessary to slow down the rate of wage increase”.

After the containment period, bargaining can resume without a roof, Green said, although there is a provision on the law that does not allow compensation for years when the increases were blocked.

Green said the goal of the legislation is to ensure the sustainability of services due to the province’s financial problems and to avoid layoffs of public sector workers.

The decision of the Superior Court can only have irritated and disappointed the six unions that had decided to face the Ford government.

“Bill 124 imposes restrictions on all forms of compensation and undermined nurses’ bargaining power during a crisis of skilled labor shortages, exacerbated by a global pandemic,” Ontario Nurses Association lawyers wrote in their court-filed factum, “by repressing wages and limiting or denying frontline health workers the support they need to do their jobs. the Ford government has further worsened a terrible situation.”