Brampton, Emily died of Covid at 13 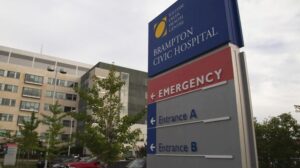 The name of a Brampton girl who died of Covid-19 was Emily Victoria Viegas, she was 13 years old. A harrowing story, a death that perhaps, who knows, could have been avoided.

Emily began to show some of the same symptoms that had caused her mother to be hospitalized – coughing, breathing difficulties and inability to stand – but her father, Carlos Viegas, fearing that due to overcrowding at Brampton Civic they would move her daughter to an Oakville hospital, tried to treat her at home. Carlos checked her temperature, gave her Tylenol to lower her fever, urged her to drink plenty of water and eat even though she didn’t have much appetite. After all, he thought, Emily was only 13 years old and would probably recover quickly. That’s not exactly how it went: on April 22, Emily joined the sad list of younger Canadians who lost their lives due to Covid.

It had just passed 9 am when Emily’s brother realized that the girl was not moving, she lay motionless in her bed, her eyes partially open. When they arrived paramedics tried to revive Emily, her heart had started beating again but she wasn’t breathing yet. Three hours after she was hospitalized, Carlos received the phone call that he feared most: Emily was gone.

Viegas, 58 years old, who worked in a warehouse was in quarantine and was the only one in his family who tested negative for Covid. His wife was the first to get sick, although she stayed home for a week before taking the test and finding out she had contracted the coronavirus. During that time, Carlos had continued to work and the  two children would occasionally go to mom’s room to bring her food and water. On  April 14, the day after the woman received the test results, the situation worsened to the point where hospitalization was necessary: she is still in the intensive care unit. Her blood oxygen level has risen to 80%, and Carlos hopes she can return home soon.

Viegas lives in an apartment in a Covid-19 hot spot in east Brampton, a city with a test positivity rate of 22%, the highest in Ontario.

But the feature of this third wave of coronavirus is that sudden infections and deaths among young people have become more frequent. There are 208,195 people under the age of 19 who tested positive for the virus until April 23, of whom, according to national statistics, 142 have been admitted to intensive care and eight have died.

Emily Victoria Viegas didn’t make it, her young life was wiped out by the tsunami called Covid-19. “Informing my wife of our daughter’s death was the hardest thing I’ve ever done,” said Viegas, who is still in solitary confinement. The task of sharing the news with friends and arranging the funeral was therefore the responsibility of other family members. “I don’t know the details. I don’t even know if we can see her – Carlos Vegas added – my mother, however, will not be there. She said she doesn’t want to see her granddaughter in a coffin.”