Budget 2022 and healthcare, first test for the Liberal-Ndp deal 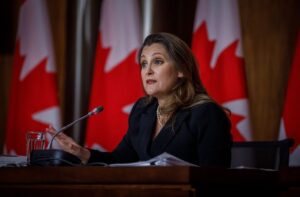 TORONTO – Expectations are growing in view of the presentation of the 2022 Budget. All eyes are on the House of Commons, where Chrystia Freeland will present the first financial maneuver since last fall’s vote on Thursday. The interest in this budget law is also evident for another reason: it will be the first overall spending plan of the federal government after the legislature pact signed by the Liberal Party and the NDP, an agreement that if respected would guarantee the survival of the executive led by Justin Trudeau until June 2025.

This year’s Budget, therefore, represents the first real test for the stability of the majority that at this point is based on the external support of the neo-democrats. The government’s armoring came with a price to pay for the grit government. In the legislature pact, in fact, there are specific measures proposed to attract the support of Jagmeet Singh: it remains to be seen if they will all be present in this year’s budget law or if they will be spread over the next three years.

For now in the Ministry of Finance the mouths are sewn. It seems certain, however, that the expected reforms in the health sector – federal pharmacare and universal dental plan – will find a first embryonic implementation already starting from this financial maneuver. Question mark on the resources that will be allocated immediately and on those that will be allocated in the future.

Provinces and territories have been asking for a substantial increase in health appropriations for two years, but the federal government has always repeated that a change of pace on this front would have occurred only at the end of the Covid-19 pandemic.

The executive announced an additional one-time supplement of $2 billion to the provinces to help them deal with pandemic-related pressures and to reduce waiting lists for surgeries that have grown exponentially since March 2020. Still on the health front, Trudeau should follow the guidelines in the electoral platform presented last summer.

During the election campaign, the Liberals pledged $25 billion over five years to provinces and territories to be used specifically in the health sector: $6 billion to help eliminate waiting lists, $4.5 billion for mental health, and $3 billion to help provinces hire more staff in hospitals and care facilities for the elderly.

The plan should be fully implemented by 2025 for low-income households. The cost involves a first allocation of 3 billion to start the program, then 1.3 billion in the first year, 4.12 billion in the second and an average of $ 1.5 billion in the following three years.