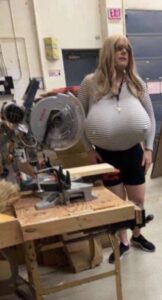 TORONTO – If a picture is worth 1,000 words, then the comical, burlesque picture of the Halton Public District School Board (HDSB) transgender teacher may turn out to be a proverbial game changer in parental choices for schools.

Over the last two years, systems of education in our country and abroad have been in the grip of a woke agenda where “transformational”, “counterculture” bureaucrats and their “allies” have been painting traditional, educational, “family values” as inherently/systemically phobic, if not definitively toxic for trans and non-binary people.

Last week, a transgender teacher shocked the world by showing up for work at an Oakville high school wearing gigantic prosthetic breasts. It is difficult to exaggerate their size and the image they project. Our newsroom, generally “neutral” and “accepting”, wrestled with the decision to report, comment or publish the picture of the teacher “in drag”.

Readers can judge for themselves whether we did the issue justice. One can only speculate the intent of individual at the centre of the story. (read Francesco Veronesi’s article Insegnante transgender a Halton un danno alla comunità LGBTQ2S+).

The case and the images have become the object of “shock” (feigned or otherwise), laughter and commentary, almost completely negative, for radio, television and print media (digital and hardcopy), world-wide. Poor Canada.

It is impossible to overstate the ridicule to which the woke movement is being subjected everywhere.

It is matched by the indignant responses of the politically correct School board officials and trustees. At first, total silence. Then an “out of this world” posting on their website blaming the media for misinformation and demanding that media correct immediately the name of the cited in their reporting:

“Oakville Trafalgar High School has received significant attention online over the past several days. (that’s an understatement)”… While we cannot confirm the identity of the individual in the photos/videos/radio segments (why not?), we can confirm that the individual is not Stephen Hanna. Stephen Hanna is a staff member of the Halton District School Board who is an entirely separate individual and is completely unrelated to this matter.”

The emphasis is theirs. A student in the class took and posted the video. Presumably that student knew the name of the teacher (now Kayla Lemieux). The Board later acknowledged that a teacher (this one?) was “trans gendering”, but the Board stands behind all the laws and regulations in Ontario.

It may be a trifling, however, that sounds as if someone is bending over backwards to avoid a Human Rights Code complaint. So now it has become a “dress code” issue.

Individuals who might want to support the teacher are nowhere to be seen or heard. Some mainstream media sought long and hard until they found a grade twelve student who “was not offended”.

The Minister of Education, Stephen Lecce, was equally invisible and radio silent. In a classic counterculture tactic of finger-pointing, he surfaced on Friday to advise that he had sent a note to the Ontario College of Teachers (OCT) that they should upgrade their teacher training to include issues of decorum and personal dignity, whatever that means to him at any given time of the day.

Good luck. The Registrar of the OCT, who seems incapable of making a correct decision let alone a courageous one, hides his woke shortcomings behind his PH.D. Alas, he is not alone. The board of the HDSB is composed of eleven women. Not one of them expressed discomfort at what could rightly be seen as a provocational parody of their sex.

On September 23, several hundred parents protested outside the Board offices calling for the dismissal of the Director. One should not be surprised if parents who are eligible start to send their children elsewhere were to start knocking knocking on the doors of the Halton Catholic District Board (HCDSB) for entry.

Ironically, an organization calling itself Halton Parents for Change is proposing to infuse the HCDSB with the culture at the centre of the controversy in the co-terminus public board.

In the pic above, Kayla Lemieux in the classroom, in a screenshot from the video published on socials