Burlington residents will elect a new MPP this election 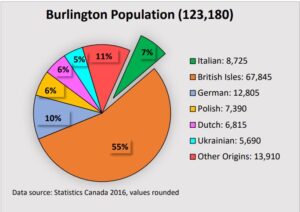 Created in 1999, the constituency of Burlington, a district with a population of 123,180 residents and growing, has been represented mostly by members of the Progressive Conservative Party. Jane McKenna, current MPP, first represented the riding when she was elected to office in 2011. She held the riding for the PC until the Liberals took over the constituency between 2014-2018.

Earlier this year, the two-term McKenna announced she will not be running in this election. Instead, Natalie Pierre is the declared PC candidate for Burlington. She will be up against candidates Andrew Drummond for the NDP, Mariam Manaa for the Liberals and Kyle Hutton for the Green Party of Ontario, none of which were available for comment prior to our going to print.

While there are no guarantees until the final vote, one thing is certain, Burlington will have a new MPP. However, electors may still be undecided as to where they will direct their support. According to the latest projections by 338Canada.com (April 7), which uses algorithms and considers all major polls, the PC are in the lead at 37%. The Liberals are close behind at 35%, followed by the NDP at 19%. 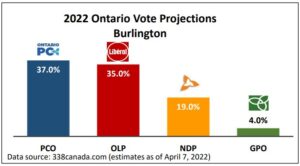 The electoral riding, located at the northwestern end of Lake Ontario, forms part of the western end of the Greater Toronto Area. The region’s economy is largely driven by some of the top industries including retail trade, manufacturing and health care and social assistance. It is also a popular area to settle for immigrants. 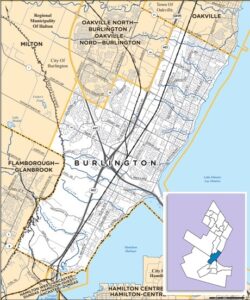 Some of the largest ethnic groups that originate from Europe include Germans, Poles and Ukrainians. Italians, another large group, account for 8,725 constituents as per the 2016 Census. That represents 7% of the district population. (See graph at the top of the article)