Cable car crashed in Italy: the safety brake did not work 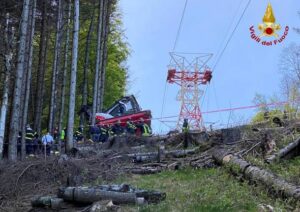 VERBANIA – It was supposed to be the Sunday of the restart, for Italy, after months of lockdowns and restrictions, but it will remain in the memory of the Italians as a tragic Sunday: yesterday in Piemonte, on mount Mottarone in Verbania, a cable car crashed, making a flight twenty meters and rolling downstream until it ends its death race against some trees. Fourteen victims and only one survivor: a 5-year-old boy who is admitted to the hospital in Turin on a reserved prognosis.

According to the first investigations, the cable that held the cabin broke and the safety braking system of the cable car did not work.

The cable car, which is publicly owned, is managed by private companies that would have carried out the renovation of the system, in the two-year period 2014-2016, and the annual revision in November 2020.

The funeral of the fourteen victims – of Italian, Israeli and Iranian origin – will be scheduled after the external autopsy examinations necessary to reconstruct the dynamics of the accident.