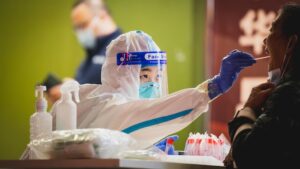 TORONTO – The pandemic is far from over: Covid-19 is growing again also in Canada, as in other countries: Italy, for example. And that “shouldn’t come as a surprise,” as McGill University genomic evolutionary biologist Jesse Shapiro put it. ““Even just based on waning immunity, the time since the average person had their last infection or their last booster, a wave was expected,” Shapiro told various news agencies.

In fact, in most Canadian provinces, immunity is not as high as it could be and for this reason the Publich Health Agency of Canada (PHAC) has already appealed to everyone to “update” with their vaccines.

The signs are, moreover, clear: infections and hospitalizations are increasing in Quebec, Alberta and British Columbia and the Public Health of Ontario reported on Friday that there is a gradual increase in cases compared to previous weeks. Ottawa, indeed, is already in a “new wave” of Covid-19, as the Department of Public Health of the city declared last week.

Covid-19 persists at a fairly high infection rate across the country, experts say. “In British Columbia, we are underestimating cases by 100 times,” said evolutionary biologist Sarah Otto of the University of B.C., who, like Shapiro, is a member of the Canadian national CoVaRR-Net (Coronavirus Variants Rapid Response Network).

Based on the network’s data sharing, Shapiro predicts that, one by one, the provinces will experience another wave. “As usual, it is difficult to say whether it will be a large or small wave: for sure there will be.”

Science magazine published an article last week warning that one or more of the numerous variants of SARS-CoV-2 (BA. 2.75.2, BQ.1.1, BF.7) “could cause major new waves of Covid-19. this fall and winter “. What that means in terms of serious illness and death, according to Science, is a very open question.

Meanwhile, a new article by scientists from the Public Health Agency of Canada – one of the co-authors is the Chief Public Health Officer, Dr. Theresa Tam – estimates that without public health measures and vaccines 800,000 people would have died from Covid-19 in Canada. The article was published in the Canada Communicable Disease Report, a medical journal published by PHAC. The article, which appeared in the July / August edition, presents a number of different scenarios. According to the document, the worst-case scenario would have seen 34 million Canadians contract the virus if it had been allowed to run free. 2 million of these people would have ended up in hospital and 800,000 would have died. The newspaper used the information until April of this year: by then 150,000 people had been hospitalized and 38,783 had died, a number that increased over the summer and now stands at around 45,000 deaths. And, unfortunately, it doesn’t end there.

Photo by Shengpengpeng Cai on Unsplash