Canada: up to 33 hours of waiting in the emergency room 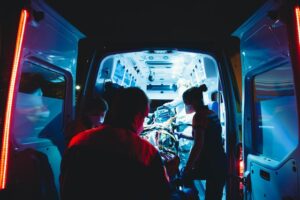 TORONTO – Hospitals are close to collapse. And for those who have the misfortune of needing them, this translates into endless waits to be visited, treated or hospitalized.

Doctors from all over the country are launching an alarm, from Ontario to Quebec to British Columbia: they are very worried, because the already difficult situation of hospitals – between pandemics and staff hulls – risks precipitating with the arrival of the traditional flu season.

In Montreal, emergency departments have already stood at around 150% capacity for much of the past week – some have even surpassed 200%. According to Dr Judy Morris, head of the Quebec Association of Emergency Physicians, the prolonged pressure on the system caused by the pandemic and the resulting shortage of staff has had a long-term negative impact that is now damaging the entire health network.

The situation is also worrying in other parts of Canada: Alberta, British Columbia and Ontario. “I’ve been in emergency medicine for nearly nineteen years now, and I’ve never seen waitings like those our patients have to endure today” says Dr. Carolyn Snider, chief of emergency medicine at St. Michael’s Hospital in Toronto. “And the most worrying thing is that there doesn’t seem to be an end in sight…”.

A report on the Ontario health system, leaked by the liberal opposition last week, dramatically highlights the extent of the problem in the province. Patients in an emergency room waited more than 33 hours to get a hospital bed in August – a 54% increase over the same month last year. Ambulance “unloading” times have also increased, with patients waiting up to 83 minutes before entering the hospital. And we are talking about ambulances: the highest level of emergency.

British Columbia’s emergency rooms are also under pressure, as Aman Grewal, head of the BC Nurses’ Union, says: many hospitals in rural areas have reduced services or are closed on weekends due to staff shortages, putting even more pressure on larger hospitals. “Those patients who would have gone to that hospital now have to travel between one and a half to two hours to get to another facility” Grewal points out. And the shortage of staff will worsen, she says, if governments don’t invest money in education programs for young nurses, as well as provide better wages and working conditions to keep those in work.

In Quebec, more than 4,000 health workers were forced to stay at home last Friday due to Covid-19 infection: the highest number in nearly two months.

With the new increase in Covid-19 cases, the possibility of new variants emerging and the upcoming flu season, the next six months are therefore promising to be particularly challenging for health systems across the country.

In an effort to free up hospital beds, the Ontario government has made the controversial decision to allow seniors to be sent up to 150 kilometers away for long-term care. But according to Dr Snider, “authorities should move quickly to free up space in the winter months and they should do so creatively, for example taking over hotels and condominiums to ensure that good care is provided in spaces other than what we are used to, because our health system is in a state of profound crisis “. And in any case it will not be enough, if the problem of staff shortages will not be solved. “Who will take care of our patients and loved ones?” asks Dr. Snider.

Photo by Mat Napo on Unsplash