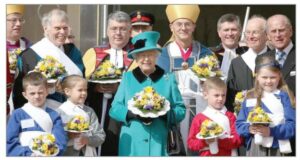 TORONTO – I am not a monarchist. However, I swore allegiance to the Crown, Canada’s Head of State and Guardian of our Constitution, when I was inducted into Cabinet as a Privy Councillor. My reactions to the passing of the venerable Queen Elizabeth II are conditioned by that.

Since her passing, English language Press and Media have been engaging in gaudy exercise to see who could find more citizens willing to testify to the lasting, indelible, personal impact this woman – a queen – has had and continues to have on them. Please, the commentary is contrived.

Elizabeth II, the political icon, presided over a Constitutional Monarchy whose essential characteristic is to allow the people’s representatives to initiate and implement laws they favour. In the opinion of most, prior to her passing, she fulfilled that task admirably. The debate concerning the relative merits of institution continue. Canada is a part of that debate.

She was certainly aware of her role and cultivated, via her coterie of advisors and “handlers”, the image of deference with a dignity that the “commoners” political caste rarely exhibits. She always demonstrated “class”. Without affectation, her words were always well chosen to suit the occasion. It is to her credit.

On the more personal front, Elizabeth II was fabulously wealthy, beyond imagination, living in places and palaces that are not easily replicated. She chose to avoid the “in-your-face” attendant lifestyles permitted and forgiven to men and women of such means. She was graceful.

She must also have been at least a trifle perturbed by the behaviour of family, children and their offspring. If that is a moral/social problem for people of the Commonwealth, it is no longer her responsibility. Their choices are not her shortcomings. Her journey is at an end.

That is now left to her heir, Charles III, to manage. He, now “the Crown”, paid due homage to Elizabeth II’s legacy, closing with a simple phrase: thank you mom.

She was a ‘real life’ person, not a fantasy, fiction of anyone else’s imagination. May she rest in eternal peace.