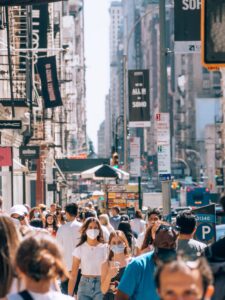 TORONTO –  Tensions, loss of contact between family members and many quarrels. A new survey conducted by the Canadian Hub for Applied and Social Research at the University of Saskatchewan shows that more and more Canadians are moving away due to differences of opinion on various issues, many have even gone so far as to reduce contact with friends or family.

And about three out of four people surveyed said they believed society had become more polarized. To be huge sources of division are the issues of vaccination and coronavirus. 72% of the people who took part in the survey said without a shadow of a doubt that the Covid-19 pandemic has certainly not cemented families while for 73% to create friction between friends and relatives were the federal elections of 2021.

The situation – with all the related and connected problems – is certainly not easy to manage: 40% reported having reduced contact with someone in their circle of family and friends. “There has been so much amplified rhetoric in the last couple of years since the pandemic began, and a lot of the rhetoric has really served to divide people, whether that division is actually real or just perceived,” research director Jason Disano told The Canadian Press.

Anti-coronavirus measures, mandatory masks, vaccinations are perfect emotional issues to be able to anger and raise a wall with parents, children, relatives and friends.

Disano said the responses of the sample of people surveyed appear to be influenced by their political leanings. For example, in the Canadian Prairies, responses were in line with conservative policies.

The survey suggested that Prairies residents were more likely than those in other regions to believe that the problems of fighting climate change and banning assault weapons were dividing Canadians. In Central Canada, however, respondents were not exactly touched by the thought that the gun ban was a divisive topic. “We see many identity policies that are taking hold in Canada, that have taken hold in the United States, particularly in the last five or six years – said Disano – we are witnessing a sort of transposition in our country. And that’s a problem.”

The exception, according to Disano, are the respondents in Quebec. The fact that a bickering related to Covid or politics can give the coup de grace to some friendships or lead to a boycott of relatives, for most residents of the French-speaking province does not make any sense. The results of the survey showed that it is they – unlike the people who live in the western part of Canada, including British Columbia – who are the least in favor of reducing contacts due to divergent opinions.

When it comes to listing which topics are able to unite Canadians, respondents said that international aid provisions (55%) and increasing ethnic diversity (53%) are at the forefront.