Candidate acknowledges importance of the Italian factor in Dufferin-Caledon 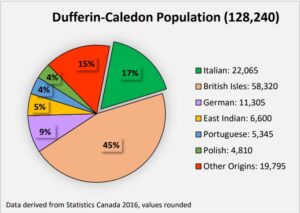 Dufferin-Caledon, provincial constituency, covers an area of about 2,300 square km, slightly less than that of Pisa, but with a population density about one third that of the Italian regional municipality. The district is located in central Ontario, north of Brampton and encompasses Dufferin County and the town of Caledon. 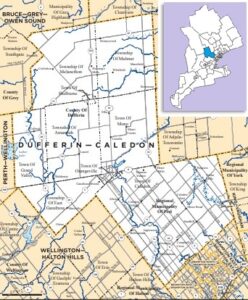 The area was popular among European settlers, primarily those of British origin. A substantial portion of the region’s population is comprised of immigrants. It continues to be a desirable place for many Europeans to call home, nearly 97,000 residents who originate from Europe live there.

In fact, Statistics Canada says 22,065 constituents identify as Italian (as at 2017). That represents 17% of the district’s population and one of the largest concentrations of Italian Canadians among Ontario’s 124 electoral districts. (See graph above)

MPP Sylvia Jones has represented Dufferin-Caledon since it was created in 2007. As a member of the PC party, she is seeking re-election for her fifth term in office. Historically, electors have shown dedicated support for the PC party. In 2018, Jones won with 53% of the electorate (29,702 votes). The NDP took 20%. The margin of victory was 18,321 votes. The Green Party of Ontario (GPO) secured 12.5% of the vote and the Liberals came in just behind at 12.4%.

With two months to go before election day, it would appear things seem poised for a similar outcome with the NDP and Liberals switching positions. According to 338Canada.com (April 2, 2022), a statistical model that uses algorithms and considers all major polls, the PC at 50% are ahead of the Liberals at 18%. The NDP sit at 15% with the Greens close behind at 12%. 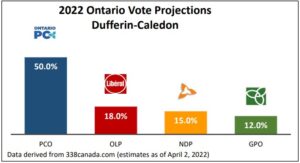 This will be the second time Jones will face Liberal candidate Bob Gordanier and GPO candidate Laura Campbell in a general election. Meanwhile, candidate Tess Prendergast, aims to revitalize support for the NDP. 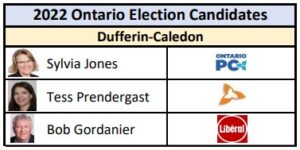 Health care is expected to be a major issue in this election. When contacted, Gordanier told the Corriere that electors have expressed concern over the current government’s plans “to quietly privatize healthcare” while proceeding with “cuts to public services like long-term care and education”. Aiming to gain more support for the Liberals, he added, “Ontario Liberals will reverse Doug Ford’s reckless cuts and will invest in the services that our community needs”. He did not provide details.

He acknowledged the concentration of Italian Canadians throughout the district saying “the large, vibrant Italian community is primarily in Bolton – our cultural hub, carrying on many Italian traditions and openly celebrating their rich Italian heritage”. In recognition of the culture they contribute to the area, he said that “is part of what makes our riding so special.”

The other major party candidates did not respond prior to our going to print. Maybe they are unconcerned.