Chief Wally Burns “We must build a healthy community” 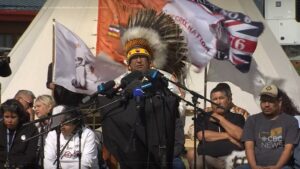 TORONTO – Myles Sanderson, allegedly responsible along with his brother Damien for the massacre in the James Smith Cree Nation of Saskatchewan, the reason for his murderous rampage, took him with him to the grave.

Arrested on Wednesday afternoon by the RCMP that had been hunting him for four days near Rosthern, he died while in police custody.

“Shortly after his arrest, he showed signs of physical distress,” Rhonda Blackmore, assistant commissioner of the Royal Canadian Mounted Police Saskatchewan said Wednesday at a press conference. While Blackmore does not rule on the cause that led to the death, a source told the Associated Press that Sanderson committed suicide.

What seems certain is that – now that Sanderson is no longer a fugitive – the province has breathed a sigh of relief. The James Smith Cree Nation reserve was, in spite of itself, the scene of nine murders, the tenth stabbing took place in nearby Weldon.

In the days following the carnage, the fugitive Sanderson was spotted, armed with a knife, outside a Wawak residence but his arrest took place in Rosthern, 45 kilometers away from the place where he had been recognized. “When a Red Jacket officer spotted him, Sanderson was traveling in a stolen white Chevrolet Avalanche truck, at 150 kilometers per hour, the vehicle, chased by the police, ended up off the road. A knife was found in the truck.”

A long, tense conference, where condolences to the families, who have lost one or more of their loved ones due to this senseless violence, were followed by the interventions of the leaders of the First Nations.

Interventions full of emotion and sadness in which the need to remain united, to gain strength to move forward by defeating all forms of violence, was highlighted. “We must engage with all of ourselves to build a healthy community, a community where there is no place for drugs and where no one is an alcoholic,” said Chief Wally Burns. Today is the beginning of another chapter in our lives. A chapter in which first of all we must celebrate the lives that have gone, that have been taken away … I thank everyone from the bottom of my heart for the support they have given us, I thank in particular the RCMP”.

It is a wounded community, this one of the First Nations, which as its chiefs have said, now needs to “process the mourning”, then to start again. “We ask the government to help us, to allocate funds to help us fight all the problems that afflict us, that torment us, that cause us so much pain,” they said in unison.