Child struck and killed by a train: the tracks were unfenced 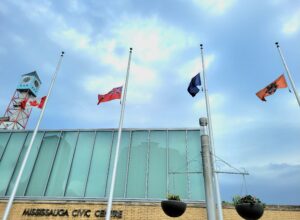 TORONTO – Tragedy in Mississauga: a 4-year-old girl was hit by a train and died. The drama unfolded in the Dundas Street and Cawthra Road area on Tuesday evening.

According to a testimony reported by CP24, around 7pm some workers who were working near the railway heard the horn of the train sound loud, insistently. “We looked at each other and we said ‘something is happening here’ …” said one of the workers. “And then, seconds later, we felt an impact. Only later did we realize that the train had hit a little girl”. It is not yet clear how the little girl ended up in the trajectory of the train (a GO train) on which there were about three hundred passengers.

“Our thoughts are with the family and, of course, also with our train crew and passengers. This tragedy has had a profound impact on everyone involved”, ‘Metrolinx’ spokesperson James Wattie told CP24.

“We are providing pain counselors for our crew and staff to investigate the matter”, added Wattie. “We also understand that the incident was also upsetting for the customers on board. We are encouraging them to seek whatever mental health support in the community they need”.

The train left the scene of the drama around 10.30pm, when the investigators completed their findings. However, Peel Police provided few details about the incident and could not confirm whether the child was with any family members when she was hit. Even the age of the little girl was not officially revealed, but the mayor of Mississauga, Bonnie Crombie, later spoke of a four-year-old girl in a tweet. “Absolutely devastated to learn of the death of a 4-year-old girl who was tragically hit by a train”, wrote Crombie. “The loss of a child is nothing short of a tragedy and my heart goes out to his family and loved ones who suffer from this indescribable and immeasurable loss”.

Today, mayor also on Twitter announced that the City Hall lowered its flags at half mast, “to mourn and honor the memory of the 4-year-old girl who tragically lost her life last night. My heart and thoughts go to the family and to all those who have been affected by this terrible accident”.

But besides the pain there are also polemics. After the tragedy, local residents told CP24 that they have long been concerned about the lack of an adequate barrier around the train tracks. “I can’t believe it” said a man living nearby, who had long ago considered starting a petition to get the City to erect a barrier, as he regularly saw many pedestrians near the tracks. And today what had to be done before was done: something that probably would have avoided this tragedy… work crews were seen setting up fences near the train tracks in Mississauga.

Meanwhile, the Transportation Safety Board of Canada (TSB) confirmed that it had launched an investigation into the accident, in addition to those of the local police and provincial authorities, also on the safety of the tracks. “Safety – they said – is our top priority”. From today, perhaps. Too late.