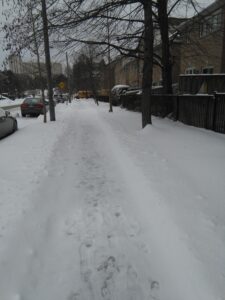 The Toronto City Council on Tuesday (June 8th) approved a sidewalk snow clearing plan that will expand the City of Toronto’s existing program to all Toronto neighbourhoods.

Implementing the new plan will enable the city to improve safety for residents in winter, provide more equitable snow clearing service to all areas of the city, and support improved accessibility in winter.

“The report shows that the pilot we launched in 2019 worked and we found equipment which can do this efficiently and effectively,” says Mayor John Tory in a press release.

Right now, the City clears 85 per cent of its sidewalks each winter. This expansion will ensure all homes in the city will receive snow clearing service on their sidewalks starting this upcoming 2021-22 winter season.

“We are finally addressing the inequity in sidewalk snow clearing service that the residents and neighbours of the East York and the Beaches communities have endured for years. It’s good news for many that, as soon as this coming winter, action will be taken to make our sidewalks safer when it snows outside&quot;, stresses Councillor Brad Bradford (Beaches-East York).

The city will now finalize plans to purchase new equipment, including the necessary smaller sidewalk plows, to expand the service starting in December.

The decision by Toronto City Council was informed by data and information collected through a successful snow clearing trial as well as a comprehensive sidewalk inventory which took place over each of the past two winter seasons.