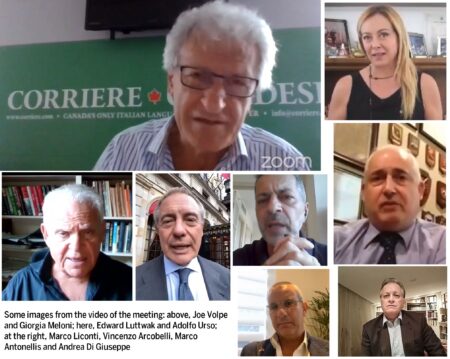 TORONTO – September 13, twelve days before a national election in Italy, the New York Times broke a story about Russian plans to interfere in Western democratic governments. It referenced an Intelligence report citing an allocation of $300 million USD to buy senior politicos. The “project” (an old tried and true American CIA tactic) has apparently been in existence since 2014, covering twenty nations and four continents.

Seems like a lot of money, but at today’s inflation rates probably not enough to satisfy the taste for gelato for too many people. It comes to about $1.8 million per year for eight years targeting former senior ministers, prime ministers and presidents. Who got how much, when?

It fits nicely in a discussion about disinformation, propaganda and defamation. Russia is an international pariah. What’s not to believe?

September 25 is decision day for Italy. As sixty million Italians prepare to cast their ballot, pollsters suggest the outcome is a foregone conclusion: a Centre Right Coalition, potentially led by Giorgia Meloni of Fratelli d’Italia. Is anyone compromised? Is she up to the task?

What do the American and Western European political class think?

On Corriere Canadese’s behalf, I participated in a panel discussion with some notable representatives of the international Intelligence advisory community (Edward Luttwak), candidates for election to the Senate from the Meloni group (Vincenzo Arcobelli and Andrea di Giuseppe), a senior Senator (Adolfo Urso) from her coalition and three other senior journalists from Italy. Giorgia Meloni herself made a pre-taped video appearance.

The exercise proved again how interconnected events are from a foreign relations point of view. Luttwak provided an assessment of the just released intelligence report, which he referenced as an instrument for extortion. It was merely an analytics report and there were no Italians on the list. Enough said.

More germane were his responses to questions regarding Meloni’s competence relative to her potential colleagues in the G-7 and Trans-Atlantic alliances. In sum, given her record and her command of the substance of the English language, she may well emerge as the Intellectual Leader of the G-7.

It seems that Senator Urso was already “making the rounds” in meetings with senior members of the American political class and the responsible bureaucratic apparatus on matters crucial to sustaining trans-oceanic relationships in the ever-more likely event of a Centre-Right Coalition victory and Giorgia Meloni’s installation as Italy’s Prime Minister.

The American functionaries who manage the military, energy and economic security issues are opening their doors to senator Urso. As is the leadership in countries concerned about energy security for Western Europe and for the demographic upheaval in North Africa and the greater Middle East.

It seems logical. There are only two superpowers – USA and China – who divide up the world. The rest of us are “client states” of various weight and significance. Russia is little more than a regional empire, important and in need of management. The European Union is Still an amorphous entity whose [in]stability represents either a threat or an opportunity to that balance.

Every election, especially in the Mediterranean basin energy supply chain, will draw the utmost attention. As in Italy, in this case.

Here below is the video of the whole meeting.