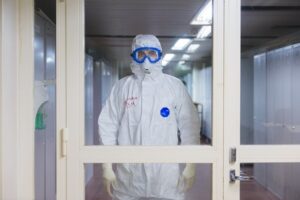 TORONTO – Another 60 deaths in one day: 10,726 the total number of victims from Covid-19 in Ontario. That recorded today is the highest number of daily numbers in nearly a year: the last time daily deaths reached this level was February 4, 2021, when 88 deaths were reported.

On the other hand, the number of hospital admissions in Ontario has dropped: they are now 4,132, compared to 4,183 the day before today. ICU employment increased slightly, from 580 to 589.

According to the data in the possession of the Province, 53% of those hospitalized in ordinary wards are made up of people who ended up in hospital due to Covid-19, while the remaining 47% were hospitalized for other reasons but tested positive for the virus once they enter in the hospital. 82% of ICU patients are instead in ICU due to Covid-19, while 18% of cases are there for other reasons, but they also have the virus.

Moving on to the new cases – even if the data are underestimated due to the limited access to the tests only to the “at risk” categories – today Ontario recorded 5,744 out of a total of 34,579 tests processed, with a positive rate of 22%. Officials reported that 4,109 of the new cases reported today were people fully vaccinated with two doses, 880 unvaccinated, 186 with an unknown vaccination status. 12,891 cases of the disease resolved today: the number of Ontario patients recovered from the beginning of the pandemic is now 874,445, while the total number of laboratory confirmed cases in Ontario is 969,437. The cases still active and are not 84,266.

In Quebec the situation is once again almost specular: today, only eight more hospitalizations (now there are 3,425 patients in hospitals), a slight decrease in intensive care cases (now there are 285) but many deaths: 88, which lead to total from the beginning of the pandemic to 12,541. The cases still active and known in Quebec are 52,059.