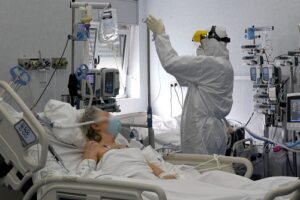 TORONTO – January 25, 2020: a man in his 50s arrives in Toronto from Wuhan, China, the epicenter of the Covid-19 epidemic, and becomes the first “presumed” case of the new coronavirus in Canada. Exactly three years have passed and since then more than 50,000 Canadians have died after contracting Covid-19, according to data released Monday by the Public Health Agency of Canada (PHAC). Today, January 24, at 12.20pm, the Johns Hopkins University dashboard, constantly updated, reported (for Canada) 50,304.

Going into the details of the provincial data, according to the PHAC the sad ranking of deaths is led by Quebec – the only province that still reports data on Covid-19 on a daily basis – with 17,865 victims. Ontario has the second highest death toll at 15,786, followed by Alberta (5,470), British Columbia (5,007), Manitoba (2,403), and Saskatchewan (1,826). In Atlantic Canada, New Brunswick and Prince Edward Island have recorded 762 and 85 deaths, respectively, while Newfoundland and Labrador have 297. Nova Scotia has recorded 706 deaths, while Yukon, Northwest Territories and Nunavut – which have stopped reporting their data last year – they confirmed a total of 61 deaths since the start of 2020, half of them in the Yukon.

In reality, the massacre is continuing silently: despite vaccines, treatments and general immunity, about 40 Canadians still die a day, according to an analysis by Global News based on provincial data. But public health experts have long said the true death toll (and infection) is likely much higher than the “official” tally: the more transmissible Omicron variant took hold in late 2021, and most testing is being done performed privately at home and not shared with public health authorities. It is therefore not excluded that some victims also fall out of the count of official deaths “for Covid-19”.

As for hospitalizations – data from last Friday – more than 4,400 Canadians are currently hospitalized with Covid-19, including over 240 patients in intensive care, according to data released by the Provinces: -10% compared to a week ago. An average of about 1,800 new infections are still confirmed per day: -15% compared to the rate recorded two months ago.

The country is currently monitoring the spread of XBB.1.5, a sublineage of Omicron’s XBB subvariant which has so far been considered by WHO to be the “most transmissible” COVID-19 variant. The subvariant, dubbed “Kraken” on social media, is spreading rapidly in Asia and is now believed to account for about half of all new cases in the United States, according to the US Centers for Disease Control and Prevention.

On Friday, Canada’s public health chief Dr Theresa Tam said the prevalence of the variant had increased from 2.5% of new Canadian infections earlier this year to around 7% in mid-January. She added that it is not known whether XBB.1.5 will become the dominant strain in Canada as it does in the northeastern United States, where it accounts for 70% of cases. “The absolute number of cases is not increasing at this time, nor is there any evidence of increased severity with this or any new variant” Tam added, citing the overall seven-day case average and decline in hospitalizations.

For its part, PHAC has not yet officially said whether it considers XBB.1.5. a variant of concern. All we have to do is wait and evaluate the data day after day, as we have done for the last three years.