CPC debate # one. No need for knock-out blows 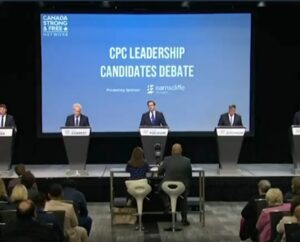 All Canadians have an interest in the process and the outcome of the Conservative Party of Canada Leadership contest, regardless of partisan affiliation. With all due respect to the other parties (Bloc Quebecois, Green, Liberal and NDP) it is one of two Parties with any realistic chance of forming a federal government. The other being the Liberals.

Thursday’s Leadership debate was refreshing for anyone who was looking for an unvarnished discussion of issues, even those muffled currently by the censorship of political correctness. It seemed to this observer that topical minefields like “Right to Life”, the values of wokism, and holding each other to ethical professional standards in a debate, were “not off limits”.

The five candidates (the sixth was unexplainably absent) gave the impression they were auditioning for the Planning and Priorities Committee of Cabinet – the guiding Executive Committee of the Privy Council. In the main, they conducted themselves accordingly. I asked myself: Can they work together, and is there some bond in their vision of their Party in which a typical Canadian might see an attraction or in whose definition might see proprietorship?

On the latter point, there were no outrageous positions that might dissuade Canadians from looking at them seriously. On two “hot-button issues” so dear to some elements of mainstream media (gender/sex identities and “life/choice” matters of conscience), the Statistics Canada demographic profile, 2021 census, will have helped all candidates, or by the debate concerning the impending Wade v. Roe Supreme Court decision in the USA.

The former issue has a direct impact on 0.33% of Canadians, while the latter has direct bearing on 0.01% of women of child-bearing age. Neither topic was dealt with the hysteria exhibited by the B.C. Minister of Finance’s now renowned “over my dead body” comment. She is not a part of the debate, and her partisan affiliation is elsewhere.

Rather, the debate seemed to strike a balance between showcasing the professional competence of the candidates and provoking public appeal by allowing room to display the level of “fire in their belly” of those same candidates. It is a fine balance which tipping point could potentially upset the intention of creating and presenting a healthy and credible alternative to the current government.

Obviously, some have already made up their mind. From our perspective, “no one crossed the line”; however, it is early times, and the sixth candidate did not participate. For now, most kept to economic and political issues related to unity (Party and Country) and inserting their “go to” themes for the upcoming debates.

That should have been sufficient for an introductory debate. It was. All candidates seemed to have internalized their campaign messages to a level not normally seen in these debates at this stage of the process.

The winner, in my view, is the Ontario PC Party. There were no negatives that could be extrapolated by the Opposition parties in the provincial campaign that could then be saddled onto their target.