CUPE at the Premier: “No more talk, Ford thinks about negotiations” 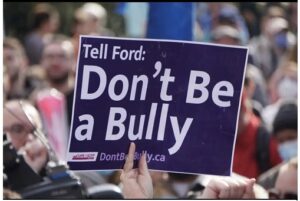 TORONTO – As expected, negotiations between the Ontario government and the Canadian Union of Public Employees (CUPE) are not the easiest.

Today was the third day in which the two sides met to try to reach an agreement that could put an end to threats, strikes, controversial laws but the road appears uphill. Meanwhile, the union representing non-teaching staff has said it wants to limit comments to media outlets as long as its bargaining committee remains at the negotiating table. “To better direct our efforts in order to reach a freely negotiated agreement we have decided not to issue statements to the media – said a spokesman for CUPE – we respectfully ask the Ford government to commit to doing the same by refraining from issuing statements that distract from negotiations and to devote time to trying to reach an agreement for the good of students and good jobs”.

Earlier this week Ford revealed that his government had made “a better offer” than the previous one, but a reliable source revealed that it contained a “two-tier” wage increase, which made the union envious of wanting a flat-rate increase for all workers. According to leaks, the latest offer calls for an annual increase of 3.5% for the lowest paid workers and an increase closer to 2% for the highest paid. CUPE, which says it has not received this offer, says it would not advise its members to accept such an offer at all.

The union says its sole goal is to negotiate a collective bargaining agreement that meets the needs of students, parents and workers, who earn an average of $39,000 a year.

Ford, meanwhile, does not shy away from his position: “We will focus on low-paid workers, this is our goal – he said – I will be right, I hope the union will be too”.

And while negotiations seem to be groping, Monday is the day the province promised to repeal Bill 28, the much-discussed Keeping Students in Class Act. “We will keep our word, we will,” Ford told the union and the NDP, which called for its immediate cancellation.