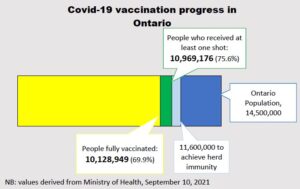 With the largest vaccination campaign underway, the province has administered more than 20.9 million doses into the arms of Ontarians. On September 10, numbers released by the Ministry of Health show health officials administered 35,844 vaccine doses on Thursday, down from 38,391 doses the day prior.

A total of 10,128,949 people are fully inoculated against the virus. That number represents about 69.9% of the Ontario population, (yellow segment).

Vaughan-Woodbridge: A hard working community with a strong Italian presence