Demonstrators will gather in Toronto to stop the crisis in Colombia 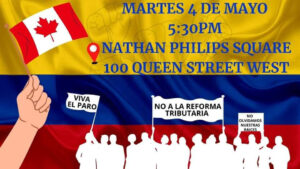 Today, the Colombian community in Toronto joins the protests of the UN and Brussels, which condemn the brutality of the security forces against the protesters who call for a halt to the Tax Reform. The violence following the protests in Colombia has already claimed 19 lives and at least 800 people have been injured.

The organizers invite Colombians to join virtually or by going to the Toronto mayor’s office, wearing masks and respecting social distancing, to pressure the Colombian government.

Pressured by national and international demonstrations, President Iván Duque ordered the withdrawal of the tax reform proposal that was being debated skeptically in Congress, where a broad sector rejects it because they consider that it punishes the middle class and is inappropriate in the midst of the unleashed crisis. for the pandemic.

The president proposed to draft a new project that discards the main points of contention: the increase in the VAT tax for services and goods and the expansion of the taxpayer base with income tax.

For her part, the representative in Colombia of the office of the High Commissioner for Human Rights, Juliette de Rivero, denounced shots by the Police against a humanitarian mission that was in Cali (southwest), verifying the situation due to the protests against the Colombian Government .

“While we were monitoring the human rights situation (in) Cali, there were no direct shots at the UN Human Rights team. However, other members of the commission received threats and attacks, as well as shots from the police, fortunately without anyone being impacted,” De Rivero reported through her Twitter account.