Election Ontario: some parties need to rid themselves of “dead weight” haters as candidates 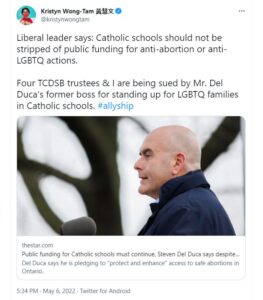 TORONTO – The election campaign is beginning to take some shape, as far as the Liberals and the NDP are concerned, and not necessarily for the better.

After almost two and a half years of academic and socio-cultural disruption in our schools, it should never have come as a surprise that Education would surface as a major concern and theme in the election. Of course, performance and achievement come immediately to mind.

Our children need to learn and how to learn.

They also need to adjust to their milieu, to the people who are a part of that milieu and with whom together they will shape the culture to come.

On the issue of “learning”, measurements of outcomes (testing) should be as useful for assessing students as for valuing teaching strategies and teachers themselves. The Liberals appear to be understanding that dynamic and so they are making suggestions about reversing some Conservative initiatives regarding province-wide testing of students at the elementary level.

But “more of the same” may not necessarily breed better outcomes. Neither of them has yet to match the initiatives of one of the more forward-looking Unions (Carpenters) who are linking learning and training with discipline, skills development to focus on personal development and careers. They treat their “education” as a “calling”, a “vocation” valued and valuable for how it can transform the individual while it improves the economic and social context wherein they operate.

Citizens who wish to debate whether carpentry (and related careers) have the cultural merit as the courses and programmes that require a different level of literary, scientific, technological or financial preparation for Life’s challenges may do so. It is not an “either or situation” for anyone, let alone everyone.

It may be helpful to recall that education, more precisely, compulsory (publicly- funded) education is barely older that the founding of Canada. Our “founders”, relying heavily on the European models available to them in the mid-nineteenth century, stressed the inherent value of instilling a particular ethos in the education system they felt indispensable to the future “milieu” they wanted Canada to become.

They inscribed it in the contractual pact (the Constitution). That contract allowed for two systems of education: a public and a separate (faith based) system.

In Ontario, the separate system is primarily Catholic. Neither the Constitution, nor the Charter of Rights and Freedoms, nor the Education Act, nor the Human Rights Code foresee, or permit, the stripping away of those contractual rights. Party Leaders should make that clear to their candidates.

Some candidates are insisting on introducing a phobia of Catholics (who still make up 33% of the population of Ontario) in the campaign by equating it with “homophobia” and “transphobia”. For example, Kristyn Wong-Tam an NDP candidate is tweeting this explicitly in her riding (in the pics above and below, her tweets: click to enlarge them).

She attacks the Liberal Leader for saying Liberals will guarantee the survival of Catholic schools (in other words, respect their Constitutional obligations). For good measure, she adds that she is being sued for standing up for LGBTQ children and families under attack in the Catholic schools. She provides no evidence of such persecution.

Her co defendant in that lawsuit, by the way, is Ida Li Preti, Liberal candidate in another part of the city. She is a trustee in the Toronto Catholic District School Board. She publicly excoriates her Board for “homophobia” and accused her fellow trustees of creating a systemically homophobic environment. Her position is that Catholicism is systemically “homophobic”. She has yet to resign from the Board, or from the Party with whose position she disagrees.