“Eremita d’amore” by Sal Marchese has been released: not just a song 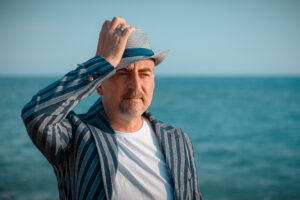 AGRIGENTO – The song and the video clip “Eremita d’amore” (“Hermit of love”) by the Sicilian singer-songwriter Salvatore “Sal” Marchese (in the pic) is online from today 7th October, on the official Vevo, Facebook and Instagram channels of the artist, as well as on the various digital music platforms. The artist, who defines himself as an “island soul and an international mind”, has made a real hymn to love that starts from the profane and gets to the sacred one.

In fact, the text and the video clip do not “only” tell about loves long gone in time, but they are also an invitation to universal love, to welcome and openness to others. A catchy melody that you takes in, as only true Italian pop music still manages to do. A song out of time, just like its author and interpreter. Yes, because Sal Marchese – who has always written poems and fables for children – is a person difficult to label or classify.

Salvatore is an elementary school teacher, poet and writer, cantor, journalist and founder of the Catholic Charismatic Association: “I follow Maria”. He has been in the United States of America and Canada, where he has given singing performances and poetry recitals in the universities and cultural centers of New York, San Francisco, Los Angeles, San Diego and Edmonton. Since November 2008, after a brief experience in the prayer group of the “Renewal in the Spirit” of his city, and in other Catholic groups in Milan, Marchese has begun a quick path of conversion which in recent years has led him to make some trips of Faith (Loreto, Medjugorje, Lourdes, Assisi, Bethlehem, Nazareth, Jerusalem and Jericho).

He seems to be taken from another era, a character outside of time who, thanks to his mystical charisma, manages to be heard and appreciated by everyone, beyond the age group, culture and nationality.

The song, also recorded in Spanish and French, has been recorded in Sicily at the studios of Armando Cacciato’s Circuiti Sonori Indie Label and arranged by the Sicilian conductor Emanuele Di Bella. The direction of the video clip, on the other hand, has been entrusted to the film-maker and actor Angelo Maria Sferrazza, on behalf of Ruah Production Stories of Rome.