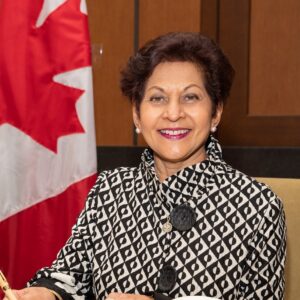 In a report released on June 15, the Ethics Commissioner Mario Dion says MP Yasmin Ratansi (in the pic) has violated the Conflict of Interest Act while she was a member of the Liberal caucus by employing her foster sister in her constituency office for years.

Although, Ratansi argued during Dion’s review of the case that Zeenat Khatri was not her biological sister, that she had been her foster sister since the 1950s. Ratansi said the bylaw doesn’t specifically state that MPs cannot hire foster siblings, the report said.

Dion concluded that Ratansi had always considered Khatri as a sister and publicly called her a sibling. “The public perception of Ms. Ratansi’s relationship to Ms. Khatri, based on Ms. Ratansi’s own public statements and actions, led nonetheless to the strong appearance of an employment relationship that was contrary to the by-law,” said Dion in a statement posted online yesterday about his report on Khatri’s hiring. “I determined that Ms. Ratansi had furthered Ms. Khatri’s private interests within the meaning of the Code by employing Ms. Khatri in her constituency office. As Ms. Khatri was not considered a family member for the purposes of the Code, I had to determine whether those private interests were improperly furthered.”

The office of Canada’s conflict of interest and ethics commissioner received a complaint about Ratansi employing her sister using public funds in 2018, but turned it away. After the story made headlines last year, the office reversed course and opened a review; it admitted it could have approached the case differently three years ago.

Dion recommended no penalty for Ratansi, a longtime MP for Don Valley East, left the Liberal caucus in November 2020 after learning CBC News was investigating the fact that she had been employing her sister as her constituency assistant since 2017 in violation of parliamentary rules. The ethics commissioner concluded that the non-compliance “occurred through inadvertence or an error in judgment made in good faith.”

As a result, Ratansi accepts the commissioner’s report and hopes it brings an end to the matter in a Facebook post. She added there: “The report now allows me to turn the page and my pledge is to continue to represent the residents of Don Valley East to the best of my ability and to ensure their voices are heard in Ottawa”.