Ethnic press, the “voice” of real Canada: videos and pics from CNE 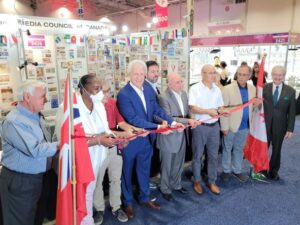 TORONTO – 750 publications in more than 65 languages, which exceed 1,000 if one includes radio and television stations (covering 111 languages) set up a display booth at the Canadian National Exhibition: perhaps in no country in the world there is so much variety. And if it’s true that the official languages ​​in Canada are English and French, it is equally true that those really spoken in everyday life is the only growing linguistic demographic among all Canadians. None excluded.

The ethnic press plays an important role in Canadian society and the NEPMCC (National Ethnic Press and Media Council of Canada) represents a point of reference for all newspapers and radio and television broadcasters that “speak” languages ​​other than English and French: all the languages ​​of the planet, in fact, including those just mentioned.

A linguistic, cultural and social richness that NEPMCC was on display on the official opening of the CNE (Canadian National Exhibition), running until 5 September at the Toronto Exhibition Center. There, in a special space, the organization exhibited the newspapers in languages ​​ranging from Afghan to Filipino, from Portuguese to Chinese, from Bengali to Italian, including Corriere Canadese, the only newspaper in printed, digital and web form all over North America.

And Corriere Canadese was one of those featured in the event, on the occasion of the inauguration held last Saturday in front of a broad representation of publishers and journalists from all media (not in English or French) gathered to talk about the state of the ethnic press in Canada and to promote their publications.

The Editor of Corriere Canadese, Joe Volpe, intervened underlining the strength of the ethnic media in a country where 23% of people speak languages ​​other than English and French (in the video below, the final part of his speech).

In addition to the Honorable Volpe, the meeting was attended by editors and journalists from various ethnic newspapers and Thomas S. Saras, President of NEPMCC, who spoke about the objectives of the organization, including the promotion of economic, social and cultural interests of the ethnic press and the enhancement of the community weight of its representatives in Canadian society.

After the interventions, the ribbon was cut in front of the NEPMCC stand, greeted by the sustained applause of the many present (in the video below).

Here below, another video and photos – click on them to enlarge – of the event (by Marzio Pelù & Priscilla Pajdo) 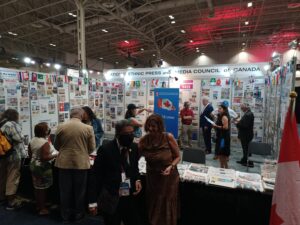