Euro 2020, Italy beats England on penalties and is the new European Champion 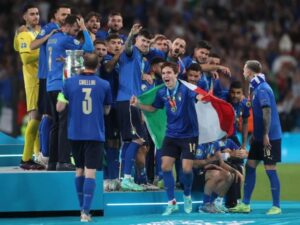 WEMBLEY – Italy beats England on penalties, after a heart-pounding final, and wins the title of European Champion for the second time in its history. Big party throughout Toronto where thousands of Italians flocked to the streets and squares to celebrate, on a blue-tinted Sunday.

The hosts start strong and unlock the match with Shaw (2 ‘), then in the second half the Azzurri increase the laps and draw with Bonucci (67’). After extra time, Donnarumma’s save from Saka was decisive from the spot: the final result was 4 to 3.

Celebrations all over Toronto, with blue shirts, banners and Italian flags that have invaded every area of ​​the city.