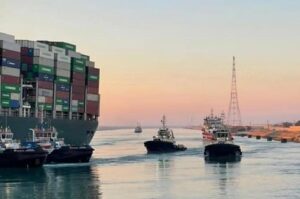 For nearly one week, the passage through the Suez Canal has come to a complete halt. The cost, up to $10 billions USD a day. On March 23, the Ever Given, a Japanese-owned cargo ship registered in Panama, ran aground and became lodged diagonally in the canal following reports of high winds and low visibility.

No official report identifies the exact reason why the 400-meter long vessel, (roughly 4 soccer fields end-to-end) became lodged in a single-lane stretch of the canal. The blockage affects a crucial shipping route connecting the Mediterranean Sea and Red Sea.

Constructed in 1898, and maintained by the Suez Canal Association (SCA), the Suez Canal is 120-miles long. It is a sea-level waterway that flows through Egypt and facilitates passage between Europe and Asia.

Without access through this essential shipping link, vessels currently holding on either side of the blockage would have to consider alternate options such as a costly detour around Africa that could add over one week to their voyage.

The 200,000-ton vessel was wedged about six kilometers north of the Canal’s Red Sea entrance near the city of Suez. The dredging operations along the eastern edge of the canal and several tug-boats joined the effort to free the massive cargo ship which became sand-banked last Tuesday.

Offloading the vessel to help lighten the load could have been an option, but one that was not employed. That tactic could have added days to the salvage mission. Days that cost billions of dollars.

According to calculations by Allianz, a multinational financial services company, each day of immobilization has cost global trade up to $10 billion USD (about $12.8 billion CAD). An estimated 13% of world trade is shipped through that corridor.

Reports of hundreds of ships are holding on either side as a result of the blockage, waiting for the passage to clear. Not only are those ships carrying consumer goods, dry-bulk cargo and oil products, but some are reported to be transporting livestock. Each day of non-movement adds to the concern and welfare of the animals.

An average of 52 vessels per day pass through the canal. In 2020, SCA reported roughly 19,000 vessels carrying about 1,170 million tons sailed through that stretch. In recent years, that number continues to climb.

In 2012 about 17,800 vessels passed through the canal transporting a total volume of 740 million tons. Since then the number of vessels increased by nearly 10%. (see graph below) 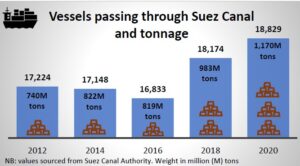 Early on March 29, Admiral Osama Rabie, Chairman and Managing Director of SCA, announced in a press release that “the Panamanian container ship has been successfully refloated”. According to the release, efforts to push and tow the vessel have “led to the restoration of 80% of the vessel’s direction”. A full restoration of the cargo ship’s direction occurred later in the day during high tide.

It is still unclear how long it will take for the backlog of ships to clear through the waterway. Once movement resumes, the disruption of supply chains may extend further as vessels converge at destination ports such as those in Europe, creating further congestion and delays. But at least now, the canal is cleared.