Fatal crash on 400 Highway, police looking for driver who walked away 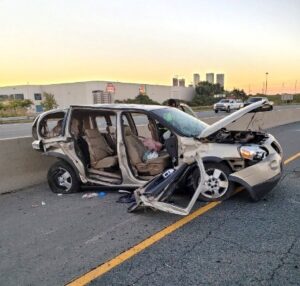 Police is looking for a driver who walked away after fatal Highway 400 crash happened around 3am in the southband lanes near the exit for Rutherford Road in Vaughan.

According to police, the driver of a red Volkswagen Jetta sedan slammed into the back of a minivan with four people inside and then walked away. In the crash, a 73-year-old woman from North York dead and the three other people in the van were taken to hospital with minor injuries.

Now police are looking for the driver: the (OPP) Ontario Provincial said in a tweet the suspect is described as a man, 35 to 40 years old, with a thin build, wearing blue jeans and carrying a reusable shopping bag. “Anyone with information call #AuroraOPP 905-841-5777”, said the police.

The southbound lanes of the highway were all closed throughout the morning rush hour. 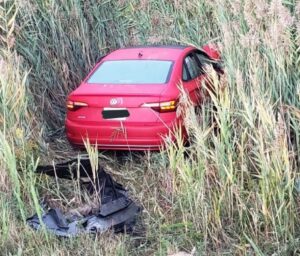 In the pics above, posted by Ontario Provincial Police on Twitter, the Volkswagen sedan and (at the top) the van involved in the crash (@OPP_HSD/Twitter)