Ford between a rock and a hard place: it’s a clash over measures and new restrictions 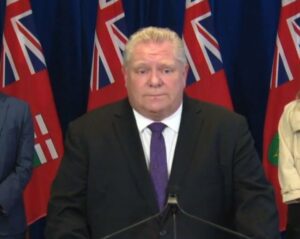 TORONTO – Controversy rages in Ontario over government measures to stem the surge in cases. And on Doug Ford, it’s a real crossfire. On the one hand, there is a growing demand from representatives of the hospital sector, health authorities and virologists calling for a crackdown and stricter and more vigorous restrictions. On the other hand, there is increasing pressure from trade organizations, restaurateurs and small businesses to loosen the measures, to breathe new life into the economy after a long year of lockdowns, across-the-board closures and restrictions. From this point of view, the Premier of Ontario has also put his own: defending himself with the phrase that has now become a mantra for a year now – “all the decisions made by the government are the result of a confrontation with the local health authorities and with the Chief Medical Officer of Ontario, David Williams” – Ford very often decided on the crackdown when the level of contagion seemed under control and, on the contrary, gave the green light to reopenings when most of the indicators advised to do the exact opposite.

That’s what’s happened in the last couple of weeks. In mid-March, the premier amended the protocols and guidelines of the colour system approved in Ontario in early 2021, actually restrictions in the red zone and gray zone.

Then, faced with pressure from medical and health authorities, Ford decided to pull the handbrake. On the other hand, the data were and still are visible to everyone: daily cases abundantly above 3 thousand, records of hospitalizations and in intensive care, all with the threatening presence of new variants that have proven, as expected by virologists, more contagious and aggressive.

The premier had to play the lockdown card once again, which came into force last Saturday, changing its name – officially now called a “shutdown” – for a duration of four weeks. But that is not enough. Because the Chief Medical Officers of Toronto, Ottawa and peel region sent a letter to Williams, asking for the obligation to stay at home again for all Ontario citizens, as had happened after the Christmas holidays and the surge in cases recorded in January. According to Eileen de Villa Lawrence Loh and Dr. Vera Etches, the measures currently in force would not be enough to cut or slow down the epidemiological curve, not least because of the decision to keep schools open – who knows how long – is contributing to the growth of infections.

On the other hand, however, the prime minister is also in the sights of those who are calling for a relaxation of the restrictions. Just yesterday, the Restaurant Hotel and Motel Association published an open letter sent to Ford challenging the government’s decision to close the patios and outdoor spaces of restaurants for the next four weeks. According to the trade association, facilities in Ontario are able to provide safe spaces to allow customers to eat in restaurants, without limiting the obligation of takeaway food.  “The health authorities encouraged the government to reopen the restaurants even in the grey area because the Sicurezza had been examined,” reads the letter, in which the premier is asked to return to his steps. But the timing of the open letter doesn’t seem to be the best. Just yesterday, for the first time, the threshold of 500 Covid patients in intensive care was exceeded in Ontario.