Ford, first “face to face” with the Municipalities 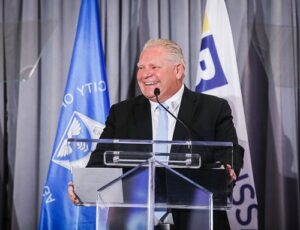 TORONTO – The first real “face to face” between Prime Minister Doug Ford and Ontario’s municipal leaders will begin tomorrow with his speech at the general assembly of ROMA, the Rural Ontario Municipal Association: with him, Sylvia Jones (Deputy Premier and Minister for Health), Lisa Thompson (Minister for Agriculture, Food and Rural Affairs) and Steve Clark (Minister for Municipal Affairs and Housing).

This year’s appointment comes six months after the re-election of Ford who will have to address the discussion of some “hot” topics, first of all that of the new housing laws in Ontario. A law which, as is known, penalizes the Municipalities which will find themselves having lower revenues due to the concessions granted to builders to speed up the construction of housing throughout the province.

The premier already reiterated last Wednesday that the revenue lost by the municipalities can be recovered by implementing efficiency practices in city governments. “We will bring the auditors to the Town Halls” Ford told the Mississauga Board of Trade on Wednesday. “If there is a deficit, we will cover it. But let’s all work together and kickstart these housing projects”.

The Ford government’s housing plan reduces or nearly eliminates development costs for developers building certain types of housing, especially those that are most in short supply, i.e. rented or affordable housing. Taxes are not eliminated entirely, but staff in a number of municipalities have predicted that the changes would still be a major blow to their coffers. Housing Minister Steve Clark assured that the province will help the municipalities fill the deficit, but also said that the province itself will check them first to make sure they are not wasting money, as Ford also reiterated in fact on Wednesday in Mississauga: “There is waste at all levels of government” that can be eliminated to help pay for the plan, underlined the prime minister.

However, the opposition accused the province of withdrawing money from the pockets of already cash-strapped municipalities to pay for a housing plan that offers breathing space to builders. And the consequences are already starting to show: the City of Toronto, to balance a budget already oppressed by a huge drop in revenue caused by the pandemic, recently announced the largest tax increase in years and the mayor of Toronto, John Tory, has warned that the additional loss of revenue from development costs poses a significant threat to Toronto’s finances. And other municipalities have also warned that they may also have to raise taxes to offset the costs of the province’s housing plan.

After the meetings in ROME, which will start tomorrow and continue for two days, the more specific audits of the individual municipalities will begin.