Fourth dose, it’s too early: only 57% got the third one 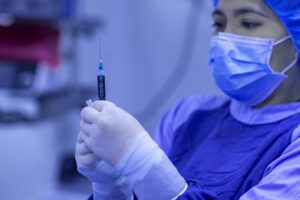 TORONTO – There is already who talks about the fourth dose, when there are still hundreds of thousands of people who still have to get the third one. Omicron 5 and its infectivity are scary and “in a hurry”, but the scientific director of the Ontario Science Table, Dr. Fahad Razak, invites to keep feet on the ground. “Although much of the conversation right now is about the fourth dose, for me scientifically the clearest opportunity, the thing we should do – and it’s not a question about availability, the vaccine is available to us – is the third dose” , he told CP24 on Monday.

His comments come just as opposition parties in Ontario are calling for the fourth dose to be extended to everyone in the province, as Quebec has done.

The third dose is currently recommended in Ontario for anyone over the age of 12, while the fourth dose is available to those over 60, as well as all First Nations, Inuit, or Métis adults over 18 years of age. But according to the latest vaccination data released by the Province, in Ontario only 57 percent of people 12 and older have received the third dose, despite widespread availability in the province.

“The third dose is the one that gives you greater protection not only against infections, but also against severe forms of the disease,” Razak said. “There are a large number of people in Ontario right now who can benefit of that third dose not yet received”.

Ontario began distributing third doses in November and expanded eligibility to anyone over 18 in late December. However, taking the third dose was disappointing. But it would be important to do so, according to Razak, because “the virus has proven to be a really terrible adversary for us, and it has changed: what is circulating now is almost unrecognizable compared to what we originally saw and against which we developed vaccines. But the newer vaccines are showing promise in providing better protection against the latest strains of the virus”.

“What will happen in the future – continues the doctor – is not very clear. Among the promising things are vaccines being adapted and developed against the variants that are circulating now, as opposed to two years ago when the virus had just emerged from China for the first time”,Razak said. “And so there is hope that these new generations of vaccines in particular will give us more lasting protection”.

Meanwhile, ahead of autumn, when there will be other respiratory diseases in circulation, according to Razak “it makes sense to get all the doses for which you are suitable and continue to pay attention, using the masks in high-risk environments to avoid infections”.